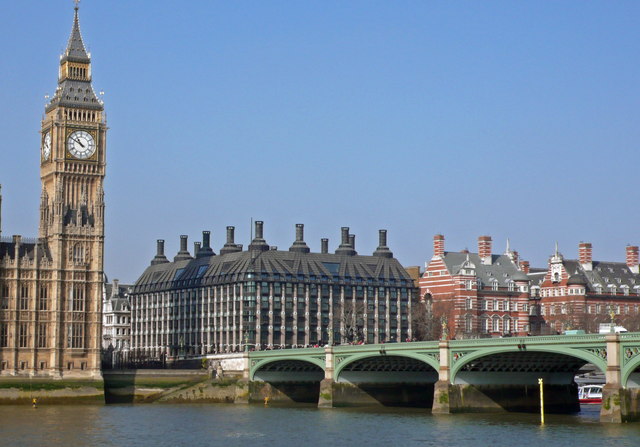 Alongside Big Ben sits the parliamentary office building Portcullis House which opened in 2001. It was designed by Michael Hopkins & Partners to represent the chained portcullis symbol of the Houses of Parliament, together with a series of 'mock' chimneys said to invoke the Gothic Revival of its neighbour.

When commissioned in 1992 the cost of Portcullis House was to be £165m. After building cost inflation and delays, the price increased to £235m, including an extra £10 million MP's had not been told about. Costs included £150,000 for decorative fig trees, £2m for electric blinds and, for each MP, a reclining chair at £440.[4] A parliamentary inquiry into the over-spend was carried by Sir Thomas Legg. Although completed in 2000, the report was never published.[5] By April 2012 the fig trees, which were rented, had cost almost £400,000.[6]

In 2015 the roof required repairs and this was expensive, the MP's considered suing the architects (Hopkins) and structural engineers (Arup) [1].

Retrieved from "https://www.designingbuildings.co.uk/wiki/Portcullis_House"
Create an article