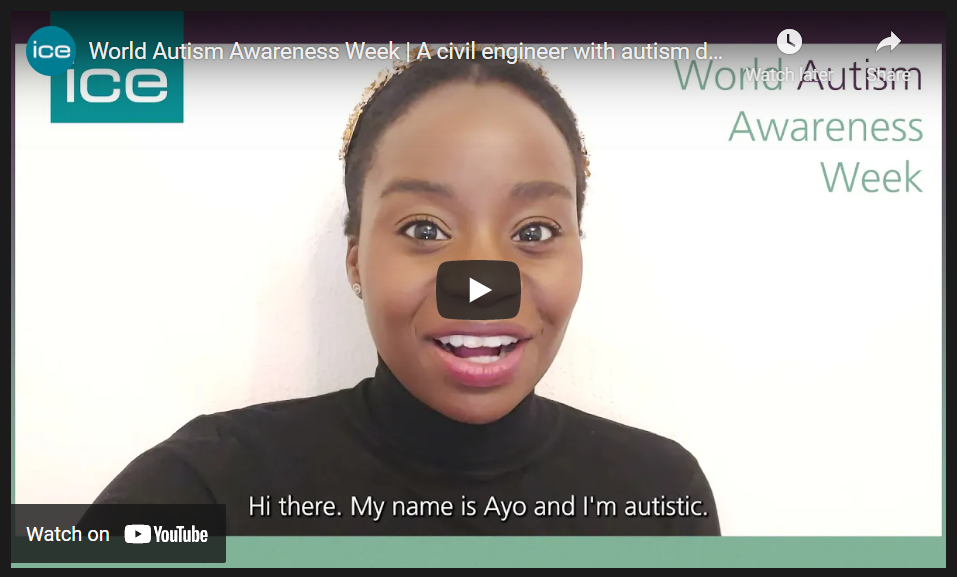 Ayo Sokale, chartered civil engineer at the Environment Agency, recently revealed that she’s autistic. Here, she explains the struggles of being neurodiverse and asks the industry if they could be doing more to build a world that values, rather than suppresses, differences.

To be authentic is to not be a copy, and to be a unique expression of self. However, we often put forward the 'self’ that makes us accepted in the world, and this means masking who we are and the things that get us disapproved and make us vulnerable. It also means we copy the things we’ve seen make others succeed.

If this sounds familiar to you, maybe you’ll relate to autistic masking.

[edit] What is autistic masking?

Autistic masking is when an autistic person camouflages as a survival strategy. This can appear as any of the following:

This is often done as the person recognises the importance of appearing neurotypical, either to avoid being bullied, harassed, socially outcasted, to get or keep a job, and to fit in.

[edit] What are the problems of autistic masking?

This may seem like a good idea. However, long term, this can lead to autistic burnout, or worse.

Autistic burnout was defined in the Autism in Adulthood journal as ‘having all of your internal resources exhausted beyond measure and being left with no clean-up crew’. This can manifest as chronic exhaustion, loss of skills, and reduced tolerance to stimulus.

Meanwhile, another study says that autistic people have more than three-fold higher rates of suicide and suicide attempts than the general population.

[edit] The link between autism and innovation

Contrary to popular culture references, not all autistic people are savant and super geniuses. In fact, though special abilities are more common in autism than in other groups, a study in Research in Autism Spectrum Disorders shows that only 28% of autistic people have special talent.

However, Professor Sir Simon Baron-Cohen, the director of Cambridge University’s Autism Research Centre, has linked autism to innovation, stating that the autistic brain preference for systemising seeks out “if-and-then” patterns, and it’s this pattern of thinking that allows us to invent.

He says in his book The Pattern Seekers that the genes for “hyper-systemising” minds can often be found in people in science and engineering, as well as those with autism.

Yet, a recent survey estimated that only 16% of autistic adults are in full-time employment.

Another found that two-thirds had felt suicidal and one-third had attempted to take their own life. Therefore, though our autistic minds are highly valued, more work is needed to include autistic people and improve their life outcomes.

[edit] What can we do to embrace neurodiversity?

The focus should be on communication. Communication is all about understanding each other and ensuring ideas can be translated from one mind to another. As all people have inherent differences, we should be thinking about how we do this effectively.

If we always take the approach when meeting new people that everyone is neuro-diverse, we can all benefit.

[edit] Valuing the differences - instead of just ‘sameness’

We say we want diversity, and the great outcome diversity brings, when in fact we push for homogeneity for simplicity, and create all systems, from education to infrastructure, for a fictional ‘normal’ person.

It often makes me think we only really value ‘sameness’.

It may be what makes us feel safe, to be surrounded by people that are just like us. However, what’s the point in saying we value difference, if when it counts, we ask people to be the same?

In the case of neurodiversity, the world is still set up in a way where you have to mask or conform by behaving in a neurotypical way. The world has little to no consideration for us in its design, from little things like a shopping mall playing loud music to large-scale assumption that everyone thinks similarly and the resulting friction.

[edit] The need for change

Humanity is at a crossroads, facing an existential climate change crisis. The actions and the mindset that got us here won’t get us out of this.

We need different minds to solve it and we don’t need to make these different minds homogenous by forcing them to fit the existing system, as that will only lead to more of the same.

This is already seen in the push for gender diversity in STEM, higher public office or even Fortune 500 companies. In the bid to increase female representation, we often ask women to model themselves against male leadership or what the stereotypes of how leadership should be performed. Is that diversity? No! It is simply replication.

We must stop shouting diversity if we are only seeking diverse exteriors without diverse minds, thinking styles, abilities, and so on.

[edit] What changes can you make?

Here are some suggestions for more inclusive communication:

Here are some questions for employers:

Here are some questions for the wider industry:

Making the changes for a neurodiverse person is no different to making provision of a ramp for a wheelchair user.

The neurotypical and neurodiverse person are equally valuable, however they’re not the same. We don’t have to be the same, act the same, and look the same to be valuable. Our differences can be a strength, if we let it be.

Ayo Sokale is a chartered civil engineer, working at the Environment Agency. She's also a past ICE President’s Future Leader, and Labour and Cooperative councillor for Caversham.

This article was originally published on the ICE Community Bog on 1 April 2021.

Retrieved from "https://www.designingbuildings.co.uk/wiki/Autistic_masking"
Create an article