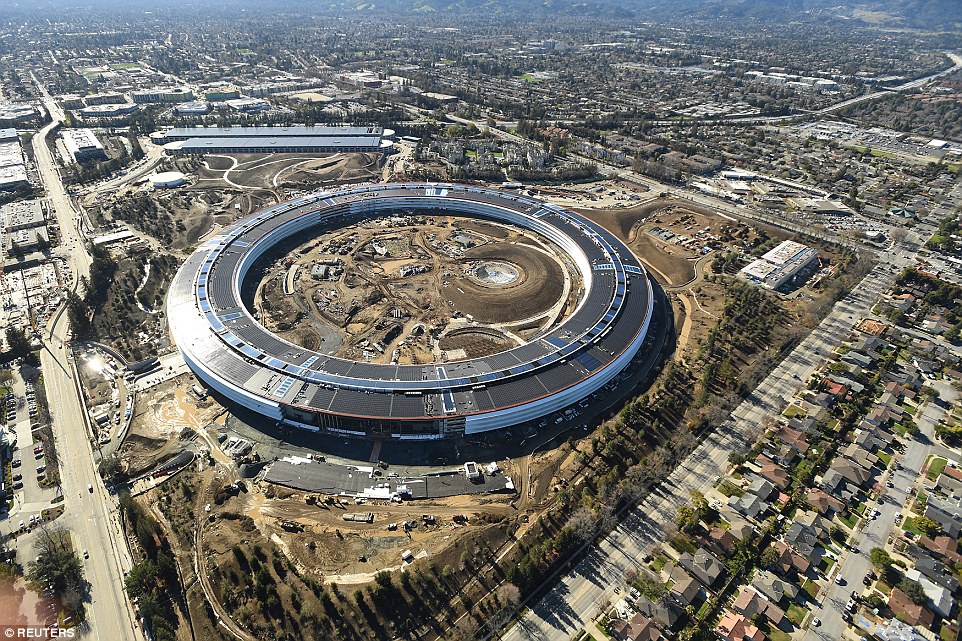 Apple Park is the headquarters of Apple Inc., located in Cupertino, California. It opened to 12,000 Apple employees in May 2017.

Nicknamed ‘the spaceship’ because of the scale of the circular building, it measures 1 mile in circumference, with a diameter of 461 m (1,512 ft). The building was envisioned by Steve Jobs who was quoted, prior to his death in 2011, as saying: “We have a shot at building the best office building in the world. I really do think that architecture students will come here to see it”.

The building was designed in collaboration with Foster + Partners. Covering a total of 75 acres, the site comprises a Wellness Center, a hilltop theatre, a 755 ft entrance tunnel, and vast 4-storey glass doors that open the large café The Ring to landscape.

Panels of curved safety glass measuring 45 ft-tall envelope the building, and are the largest curved glass panels in the world. 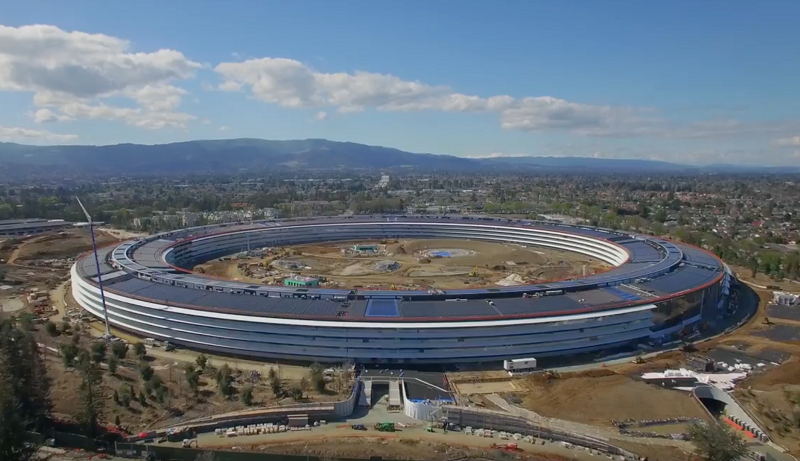 The building is intended to be one of the most energy efficient in the world. The site is to be entirely powered from renewable energy, with solar panels installed on the roof capable of generating 17 megawatts of power. Rather than using air conditioning, 4,300 hollow concrete slabs act as the floors, ceilings and HVAC system, funnelling cool and warm air through the offices, in effect making it a ‘breathing’ building.

In addition, Apple is planting 9,000 drought-resistant trees throughout the campus, while the site enclosed by the building will form a 30-acre landscaped park complete with fruit trees and winding pathways.

The cost of the land was thought to be $160 million, and the initial project cost was estimated at $500 million. However, by 2013, the total cost was estimated to be approaching $5 billion. Having been hit by a series of delays, it was completed at the end of 2017.

In February 2018, there were reports that emergency services had treated Apple staff for injuries caused by walking into the campus' numerous glazed walls. At least two people had received treatment for minor cuts to the head and, according to a report on Twitter, seven people 'physically hurt' themselves on the first day the campus opened.

Building regulations in the UK, and similar regulations in California, require glazing to have markings to prevent people colliding with it. For more information, see Glass manifestation.

Retrieved from "https://www.designingbuildings.co.uk/wiki/Apple_Park"
Create an article