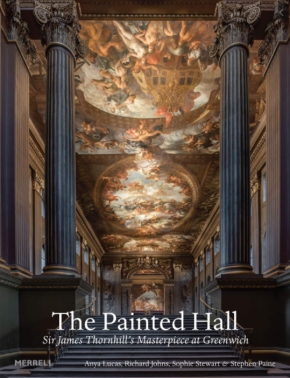 In the pantheon of British art, who now rates James Thornhill? He is probably better known as Hogarth’s father-in-law than for his paintings, yet it was Thornhill who was the first British artist to receive a knighthood, and who made so much money from his art that he was able to buy back and restore his family estate.

Hogarth undertook nothing on the scale of Thornhill’s masterwork, the Painted Hall at Greenwich, an astonishing 45,000 square feet of walls and ceilings alive with gods and goddesses mingling in the clouds with monarchs, scientists and navigators, framed by fictive architecture, flowers, swags, ships and military trophies. It is a magnificent tribute to Britain’s naval power and to the three successive monarchs who ruled during the 19 years (1707–26) Thornhill and his assistants worked at Greenwich, intermittently with other projects, covering the three vast spaces designed by Hawksmoor within Wren’s master plan, the vestibule and the Lower and Upper Halls.

Judgement of Thornhill’s achievement has for years been clouded by the poor condition of the paintings. The first of many surface cleanings took place only seven years after completion and the effects of damp weather were already noted in the mid-18th century; the paintings darkened from the effects of smoke from coal-burning stoves, the large open fireplace in the Upper Hall and the often crude retouchings of successive restorers and their repeated applications of varnish which resulted in an almost monochromatic appearance and a deadening of texture. Fifteen separate layers of varnish were noted in the 1950s when the first serious cleaning and conservation of the paintings took place, by the Ministry of Works.

Despite the success of this campaign, remarkably sensitive for the time, it treated the painted surfaces in isolation, without considering environmental issues. Further deterioration took place as a result. In 1998, when the Greenwich Foundation took over as custodian of the site from the Navy, it inherited a substantial backlog of building repairs. After tackling them, the foundation turned to the paintings and a major conservation programme was carried out between September 2016 and March 2019. This time a more holistic approach was taken, with passive measures to control light and heat, and a new access route via the Undercroft to minimise the amount of dust and humidity brought in by visitors.

This beautifully produced book celebrates both the glories of Thornhill’s vision, and the triumphant success of the conservation work: at last it is possible to appreciate the dynamism and colour of the paintings, the continuity between real and trompe l’oeil architecture, and the opening up of illusionistic spaces above the ceilings and behind the end wall. The book is generously illustrated.

The text comprises Anya Lewis’s elegantly written account of the architectural history of the Hospital and the background to Thornhill’s commission; an exposition of the meaning of the paintings by Richard Johns, with identifications of the figures and their parts in the allegory; and finally an account by conservators Sophie Stewart and Stephen Paine of the conservation of the paintings, historical and recent. Although their chapter includes technical details, it is not overwhelmed by them and ably communicates some of the difficult decisions and compromises necessary to bring the paintings back to life again. After reading this book, I rushed to Greenwich at the first opportunity – and I was not disappointed.

This article originally appeared as ‘Unvarnished glory’ in Context 165, published by The Institute of Historic Building Conservation in August 2020. It was written by Julian Treuherz, art historian and curator.

Retrieved from "https://www.designingbuildings.co.uk/wiki/The_Painted_Hall:_Sir_James_Thornhill%27s_masterpiece_at_Greenwich"
Create an article