FMB take a look back at some of the biggest home décor trends over the last 75 years.

In 1941, the FMB was established by a group of builders looking to rebuild London after the devastation of the blitz. At the same time people across the UK were rebuilding their lives.

After the austerity of the war, housewives were seeking out colourful and welcoming interiors for their homes. 1940s homes were carpeted and wallpapered, floral, plumped up furniture was favoured and family photos, potted plants and knick-knacks started to appear.

The 1950s was the decade of the baby boomers and the architecture of houses reflected that. Houses were designed with more than one bathroom to accommodate the growing families.

Decor became more of a passion as people had more income, with influence from Scandinavia reflected in the modern materials and furniture styles and the pastel and monochrome colour schemes.

1960s homes were decorated in psychedelic patterns and colours inspired by the American hippy movement and fabrics from Morocco and India. As space travel became possible, the world’s fascination with the future was reflected in interiors with gleaming chromes and furniture made from heavy duty plastics, with the Panton chair becoming one of the iconic pieces of the period.

During the 1970s there was a change in mortgage laws in the UK meaning more people could afford to buy property and DIY rose in popularity as owners wanted to personalise their homes.

A natural colour palette was popular with browns and oranges featuring heavy and the newly available plastic furniture was popular. The clashing patterns and colours of the 1970s could look garish but can be an attractive focal point in modern décor when used in moderation.

Frequently labelled the 'ugliest decade' for home décor, the 1980s look is one that’s unlikely to make a big comeback any time soon. This decade was all about pastels and floral prints, with Laura Ashley decorating everything from sofas and curtains to ruffled tablecloths.

Other questionable trends were glass-topped tables, large room-dominating potted plants and bordered wallpaper. One of the trends that has been making a big comeback is the kitchen island which is popular for entertaining.

In the 1990s, people started to retreat from the chintzy, bold and cluttered look of the 1980s. The minimalist look rose in popularity with nods to Japanese style décor.

In keeping with a more minimal look, pale wood rose in popularity as did white kitchens, but it wasn’t all about minimalism – the colour that are synonymous with the period are hunter green and dusty rose, and patterned wallpaper was still popular. Wall-to-wall carpeting rose in popularity as did the conservatory, which lead to a massive increase in demand for wicker furniture. 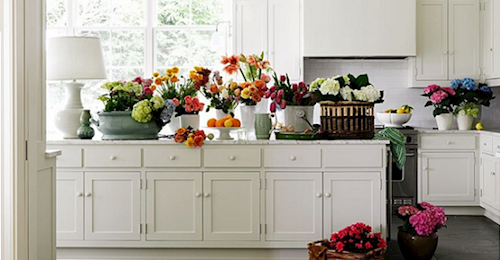 The 21st century has seen a great rise demand for sustainable living. The Scandinavian look came back in to fashion but with a contemporary twist and flat pack furniture has gained popularity.

Technological developments led to an increase in demand for home offices and media rooms and outdoor spaces have seen more attention with an increase in landscaping and al fresco dining areas.

This article was originally published here by FMB on 12 July 2016.

Retrieved from "https://www.designingbuildings.co.uk/wiki/Recent_history_of_interior_design"
Create an article