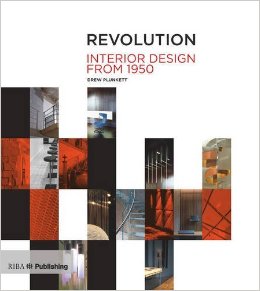 The emergence, evolution and consolidation of interior design into a distinct practice and profession is the subject of this engrossing and authoritative new book.

Written by Drew Plunkett, an architect and interior designer, the book begins in the 1950s, weaving through the decades as styles, trends and social mores evolve and change, all the while reflected and expressed through the design of interiors.

‘It is a story…’ writes Plunkett, ‘of clients with entrepreneurial visions and business acumen who chose mostly unknown designers and gave them freedom. Together they created a benign monster and the interior profession had to grow and change to serve it. It could no longer be a cottage industry.’

The protagonists who helped create this ‘benign monster’ rose out of the post-war consensus, eager to express their creativity in an era of new sensibilities and teenage rebellion. The book explores how, as post-war austerity loosened, ‘the home became a place for self-expression and prompted expectations of something more radical in public places’.

Interior design, Plunkett explains, was less burdened by philosophical concerns of the kind that dominated the ethos and aesthetics of the New Brutalism movement. Interior designers embraced modernism with a sense of eclecticism and fun that evaded architecture. It would take the emergence of postmodernism for architecture to ‘lighten up’, by which time, interior design had already stolen a march.

The book traverses expertly through the decades, setting the socio-political and cultural scene well for those less familiar with the times. Plunkett takes the reader from the Soho coffee shops of the 1950s, to the futuristic décor of the Chelsea Drugstore in the 1960s, to Manchester’s Hacienda and the acid house aesthetics of the 1980s, to the high street behemoths of the early-20th century and beyond.

Plunkett is a scholarly writer, who is clearly keen to provide detailed analysis, but still inflects his prose with humorous anecdotes and flashes of perception that illuminate the subject as only someone who has been immersed in it for so long can do.

The book is well-presented with more than 200 photos and images, some that have rarely been published. It will prove a valued and worthwhile read for current and past practitioners as well as the interior designers of the future.

You can find out more about the book and purchase it here.

Retrieved from "https://www.designingbuildings.co.uk/wiki/Drew_Plunkett_-_Revolution:_Interior_Design_from_1950"
Create an article