Notation and units on drawings and documents

The same notation conventions should be followed by all so that there is clear communication between different people and mistakes are avoided.

The decimal marker (full stop) on the baseline is the standard decimal point in the UK; but the marker at the halfway position is also acceptable, e.g. 1.618 or 1·618. It should be noted that Continental practice is to use the comma on the baseline, e.g. 1,618.

When the value to be expressed is less than unity it should be preceded by zero (e.g. 0.6 not .6). Whole numbers may be expressed without a decimal marker, but it is also wise to add the marker to avoid misunderstandings, e.g. 6.0. The appropriate number of decimal places should be chosen depending on the circumstances in which the resulting value is to be used.

To avoid confusion with the Continental decimal marker, no thousand marker (comma) should be used. Where legibility needs to be improved a space can be left in large groups of digits at every thousand point. Where there are only four digits, a space between the first digit and the others is not desirable (e.g. 15 000, 1500). However, the comma is used in currency, e.g. £115,000.

It is common for the letter 'x' to be used in place of the multiplication sign. This is considered incorrect in mathematical writing. In the algebraic notation, a multiplication symbol is usually omitted wherever it may cause confusion: 'a multiplied by b' can be written as ab or a' b.

On Microsoft Windows computers, holding the [Alt] key and typing the number 0215 on the number pad (right hand number keys on the keyboard, not the top row numbers) will produce the multiplication symbol (×) for you.

The main units that should be used are as shown in table below. 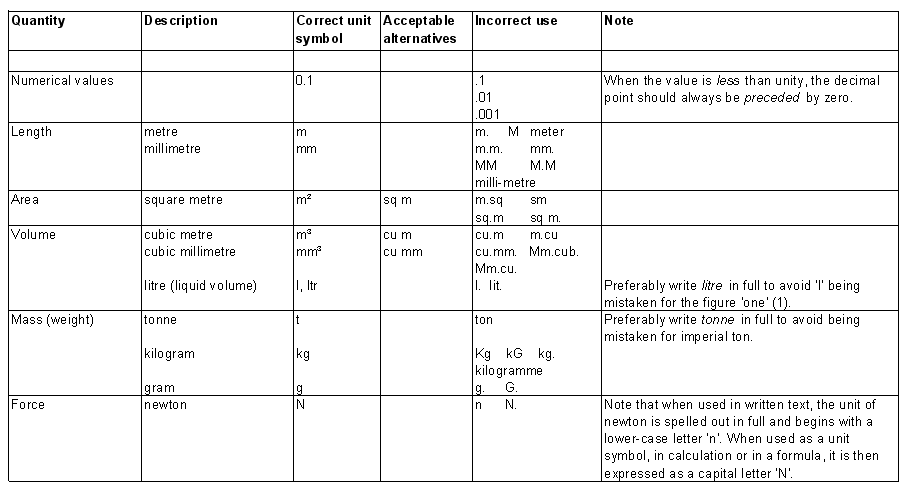 The same unit symbol, i.e. m, mm, kg, should be used for singular and plural values (1 kg, 10 kg), and no full stops or any other punctuation marks should be used after the symbol, unless it occurs at the end of a sentence.

Use a ‘solidus’ or sloping line as a separator between a numerator and a denominator, i.e. 3 kg/m³ or 3 kg/cu m (Mass per unit volume - SI derived unit of density).

A single space should separate figures from unit symbols: 10 m, not 10m.

Difficulty may be experienced when reproducing the squaring and cubing indices for m or mm, and m³ or mm³. In such cases, units may be written with the indices on the line instead of the superscripts (m2, m3). Alternatively, and probably for the best, particularly when the general public is involved, the abbreviation ‘sq’ and ‘cu’ should be used (e.g. sq m and cu m).

Units should not be hyphenated (milli-metres)

It is important to distinguish clearly between the metric tonne and the imperial ton.

The interval of temperature should be referred to as degree Celsius (°C) and not as centigrade. The word centigrade is used by Continental metric countries as a measure of plane angle and equals 1/10 000th part of a right angle.

Where appropriate superscript and subscript text is not available, the following notations may be used instead:

Retrieved from "https://www.designingbuildings.co.uk/wiki/Notation_and_units_on_drawings_and_documents"
Create an article