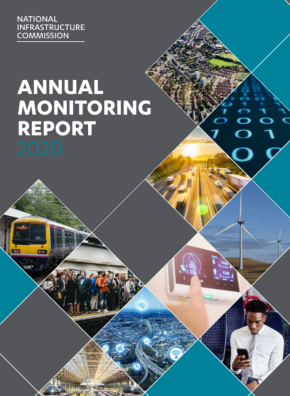 The scope of the National Infrastructure Commission’s 2020 monitoring report takes in the progress that the Government has made against the advice set out in the six substantial studies that it has published since formation.

It is important to note that what the monitoring report does not do (at least in its entirety) is to consider the performance of the Government against the recommendations put forward in the National Infrastructure Assessment (NIA) in 2018.

The Government’s forthcoming National Infrastructure Strategy, which is to be published as part of the Budget, will be its official response to the NIA. We would therefore expect the NIC to incorporate performance against the NIA recommendations in next years’ monitoring report or through another dedicated channel.

[edit] Room for improvement in the Government’s performance

The six areas in which the NIC has assessed the Government’s performance are as follows:

The report concludes that minimal progress was made during 2019 on High Speed North, although of course it does recognise that the Government’s recent decision to greenlight High Speed 2 and ensure that it is properly integrated with Northern Powerhouse Rail is a positive step. On Crossrail 2, the commentary points to there having been limited progress throughout last year and the NIC has called for the Government to approve the revised business case for the scheme as a priority.

On smart power the report outlines the need for the Government to make more progress in enabling the development of energy storage technologies and demand side management approaches. It also suggests that progress in meeting housebuilding targets in the Cambridge-Milton Keynes-Oxford arc is not enough and that a clear strategy for addressing this shortfall should be drawn up, alongside reaching a position on the Oxford-Cambridge Expressway to ensure that improved east west connectivity is unlocked without further delay.

The report finds that the motorway network now has near universal mobile coverage for voice calls and 4G data services, but that there is a great deal of work required to bring the railways up to speed. Finally, the NIC has asked the Government to provide long-term and stable funding for the Centre for Digital Built Britain to utilise the potential of digital twin technology for the built environment sector.

[edit] Infrastructure in 2020 and beyond

Whilst the NIC’s report paints a mixed to negative picture of the performance of the Government over the last 12 months on infrastructure, there are of course a series of extenuating circumstances.

Brexit continued to cause uncertainty, whilst Government leadership changes coupled with a General Election in December meant that business as usual simply did not happen in terms of decision-making concerning the infrastructure sector.

The key thing going forward is that the Government is able to dedicate more of its time to addressing the concerns that the NIC has raised. Moreover, the forthcoming publication of the National Infrastructure Strategy represents a unique opportunity for the Government to present an evidence-based, long-term and joined-up approach for UK infrastructure provision.

If the Government can deliver a comprehensive strategy to match the impressive investment commitments that it has made, then industry will rally.

The ICE’s views on what should be included in the National Infrastructure Strategy can be found here.

This article was originally published as ‘Reflections on the National Infrastructure Commission’s Annual Monitoring Report’ on the ICE Infrastructure Blog on 28 February, 2020. It was written by Ben Goodwin, ICE Lead Policy Manager.

Retrieved from "https://www.designingbuildings.co.uk/wiki/National_Infrastructure_Commission%27s_Annual_Monitoring_Report_2020"
Create an article