In Plain Sight: reducing the risk of infrastructure failure 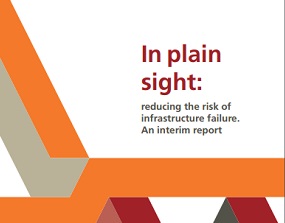 During his tenure, the out-going ICE President Tim Broyd asked Professor Peter Hansford of BRE to review whether the potential vulnerabilities in economic infrastructure are fully understood.

‘In plain sight: reducing the risk of infrastructure failure. An interim report’ is the first output from the review, published in November 2017.

The review does not investigate the details of the Grenfell Tower disaster, which are the subject of a public inquiry, nor does it specifically examine tower blocks or fire.

The Grenfell Tower fire was a profound shock for the country and raised the concern that any failings may be found to be systemic and not site specific. In these circumstances, organisations for professionals in all areas of the built environment sector should examine whether action needs to be taken to deliver safer and more effective whole-life stewardship of assets.

[edit] Background to the interim report

Much of infrastructure comprises legacy assets put to daily use by far more people than originally envisaged. For new assets, the procurement, funding and management techniques may be complex. This can cause difficulties around continuity of knowledge, vision and intent.

These and similar pressures impacting the nation’s infrastructure invite the question of whether there are increasing risks of infrastructure failure and, if already apparent – hiding in plain sight?

The key lesson from previous incidents in infrastructure and other sectors is there is never one single cause of failure. Failures happen when multiple factors align at a single point in time, for example: human error; poor design; weather conditions, etc.

The Panel’s interim conclusions are the result of a two month period of study and consultation. The Panel has found that while the risk of a major failure of UK infrastructure is relatively low, it is still not low enough. ICE should, work with government and other stakeholders, to consider afresh what steps are necessary to reduce further risks of failure.

The interim report has four main areas of recommendation:

ICE should commission a study to analyse and validate the 12 lines of defence against infrastructure failure in the model set out in this interim report.

ICE should work with other infrastructure organisations to improve how the sector shares information from safety reviews, accidents, failures and near misses.

ICE should review the robustness of its Continuing Professional Development regime and Professional Code of Conduct. ICE should also review the effectiveness of arrangements for professional oversight of assets in different sub-sectors of infrastructure.

ICE should work with other infrastructure organisations to identify if improvements can be made to the governance role in the development and management of assets. This should include the competence of boards, scrutiny systems and the presence of a technically competent engineering voice in safety-critical decisions.

In addition to commissioning a study on the 12 lines of defence, the Panel recommends establishing three Task and Finish groups to take forward the three areas of Lesson sharing, Competence and Governance.

This article was originally published here by ICE on 6th Nov 2017. It was written by Gavin Miller.

Retrieved from "https://www.designingbuildings.co.uk/wiki/In_Plain_Sight:_reducing_the_risk_of_infrastructure_failure"
Create an article