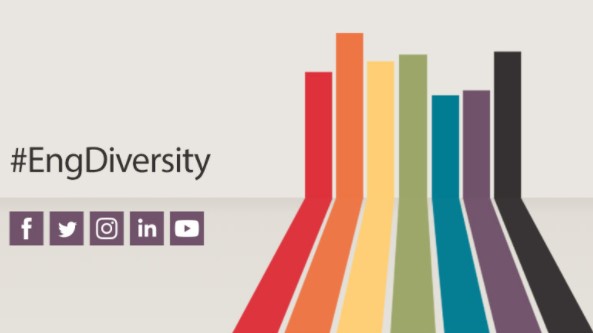 LGBT History Month was started in the UK by Sue Sanders and Paul Patrick as a Schools OUT UK project, which first took place in February 2005.

The month is intended to raise awareness of, and combat prejudice against the LGBT community while celebrating its achievement and diversity and making it more visible.

Engineering organisations are “digging deeper” when it comes to LGBT+ awareness, according to an engineer at WSP.

“We’re seeing organisations in engineering and the built environment moving beyond the surface of diversity with simple awareness-raising campaigns, but digging deeper into exploring intersectionality, the (re)definition of gender, being an active bystander,” said Julian Phatarfod, principal transport planner at WSP.

“We’re seeing the status quo of our people, processes and systems being challenged.”

For Phatarfod, the key thing he's learned over the past couple of years is that “everyone is an ally to someone else in a different way, and appreciating that is the first step” to levelling the playing field.

Phatarfod acknowledged that the COVID-19 pandemic of 2020/2021 has presented a few challenges for the LGBT+ community.

This means that organisations will need to make an even greater effort to make people feel included.

“However, we’ve also seen a lot more understanding and compassion from colleagues and clients about people’s different circumstances and living arrangements while working from home,” Phatarfod said.

“Putting yourself in someone else’s shoes is at the core of inclusion, which has been a positive step for a lot of our efforts.'

LGBT representatives in the engineering industry have seen a worrying fall in LGBT membership activity and networks due to the COVID-19 pandemic.

Jyoti Sehdev, senior civil engineer and Group Equality, Diversity & Inclusion Lead at Costain, told ICE: "I know that it's not just Costain, as I've spoken to many other chairs of LGBT networks and it's something that we're seeing across the industry as well.

"There's really a question there of how we can get active membership. That includes all the networks who are allies as well, to really get involved with making our industry and our workplaces a better, safer and more inclusive place for LGBT people."

"Another significant change ... I think there's greater representation of the underrepresented ...Trans inclusion is unfortunately still not normalised or fully understood, but we are seeing companies taking steps towards it."

All the usual Pride celebrations and parades in the UK had to be cancelled during the pandemic. Sehdev said that this has changed the focus of Pride activities.

"I think we've seen that Pride celebrations be de-centralised from the actual parade itself, and the inclusion events are more about inclusion and history of LGBT people and their allies.

"LGBT History Month and Pride months, as well as other awareness days, have taken the forefront, which I think is important, and I think it brings to light the other aspects of being LGBT+," she said.

This article was originally posted as Latest News on the ICE website. It was written by Anh Nguyen and Danny Whitebread and published on 2 June 2021.

Retrieved from "https://www.designingbuildings.co.uk/wiki/Engineering_equality:_LGBT_stories_from_ICE"
Create an article