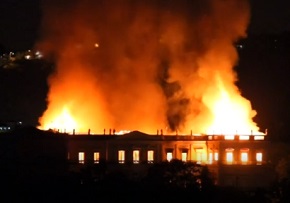 On 2 September 2018, a devastating fire broke out in Brazil’s National Museum in Rio de Janeiro.

It is believed that the museum has been completely destroyed, along with a sizeable proportion of its archive which is estimated to contain more than 20 million items related to the history of the Americas. While there are no reports of injuries, two of the museum’s vice-directors said that the loss to Brazilian science, history and culture was “incalculable”.

Located inside Rio's Quinta da Boa Vista park, the museum had recently celebrated its 200th anniversary, having been founded in 1818. However, it had begun falling into disrepair; an issue which some Brazilians complained was the result of the government’s austerity cuts to science and education, and a broader neglect of national assets.

The cause of the fire is as yet undetermined. There were reports that firefighters were unable to adequately tackle the blaze at first because two hydrants were empty, meaning they had to pump water from a nearby lake.

Rio de Janeiro’s chief Colonel Roberto Robaday said; “This is an old building with a lot of flammable material, lots of wood and the documents and the archive itself.”

Brazil’s president, Michel Temer said; “Today is a tragic day for the museology of our country. Two hundred years of work research and knowledge were lost.”

In October 2018, a month after the fire, the Brazilian authorities indicated their intention to rebuild the National Museum, with emergency works underway to contain, clean and protect the remaining structure.

R$8.9 million ($2.4 million) has been allocated to the first phase of the rebuilding process by the Department of Education (MEC). This phase is expected to take six months and will involve clearing the site before protecting and anchoring the remaining structures and building a temporary, independent steel roof.

Retrieved from "https://www.designingbuildings.co.uk/wiki/Brazil_National_Museum_fire"
Create an article