On 14th March 2017, BRE published a new report to provide evidence of the return on investment of BREEAM. 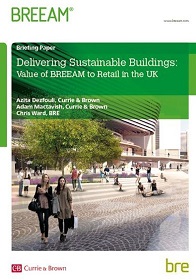 Delivering Sustainable Buildings: Value of BREEAM to Retail in the UK was published at MIPIM, and shows how retailers and developers can use BREEAM to help attract customers, increase operational effectiveness and manage costs and income.

The report was prepared by researchers at BREEAM and Currie & Brown, the leading international asset management and cost consultancy. It draws upon on examples of the approaches and benefits seen by some of the UK’s largest and most experienced developers and retailers, and includes guidance for those aiming to get the most out of their investment in sustainable retail buildings, whatever their size or role in the sector.

Examples quoted in the report include:

"In 2013, energy use and associated carbon cost the sector £3.3 billion. Adopting BREEAM performance standards brings valuable operational efficiencies associated with using a consistent industry standard method. It also acts as a spur to innovation and a tool to assist communications within project teams and other stakeholders.”

“This study illustrates the importance of the retail industry to life in the UK. It powerfully demonstrates the many ways that high sustainability standards help the sector get the most from its property, its largest operating cost after employment".

The retail-specific value report for BREEAM follows on from publication of 'The Value of BREEAM: A Review of Latest Thinking in the Commercial Building Sector', published at the end of 2016.

Among the findings of this report were a 66% reduction in carbon dioxide emissions for a typical BREEAM Outstanding rated building, with 32% reductions for BREEAM Excellent rated buildings.

This article was originally published here by BRE Buzz on 14 Mar 2017. It was written by Simon Guy.

Retrieved from "https://www.designingbuildings.co.uk/wiki/BREEAM_and_retail"
Create an article