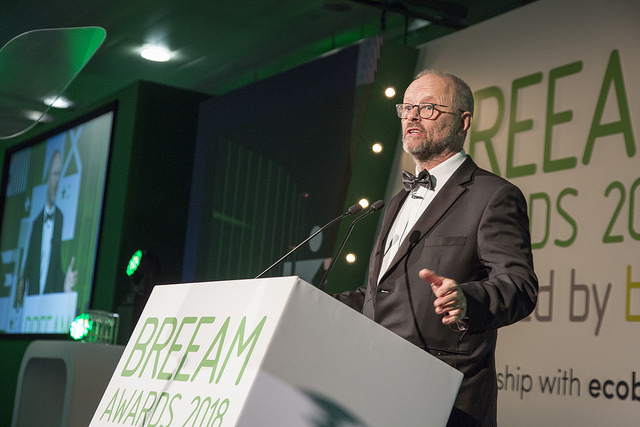 The winners of the BREEAM Awards 2018, for building projects and professionals with extraordinary achievements in sustainability, were revealed at a gala event on 7th March 2018 at London’s ExCel.

Attended by hundreds of built environment practitioners from around the world, the awards were hosted by actor and TV personality Robert Llewellyn, and a keen advocate of sustainability and renewable energy technologies.

The winners include many of the most innovatively sustainable buildings in the UK, and in countries across the globe from China to Brazil. The awards, held this year in partnership with Ecobuild, also recognise high achievement by architects, M&E consultants and BREEAM assessors – and BREEAM again partnered with GRESB to recognise socially responsible investment. New this year are the Regional Awards for building projects that will of inspire sustainability advances in their particular areas of the world.

Selected by an independent panel of experts from shortlists of the year’s highest scoring BREEAM certificated projects, the winning buildings represent superb design and performance in new and existing buildings, refurbishments and fit-outs. They were:

The outstanding achievements of the shortlisted projects gave the panel of judges a difficult task when choosing the winners.

“Even more important than the qualities of the shortlisted and winning projects, are the examples they set for others. By demonstrating the practicalities and benefits of sustainable solutions – particularly those that are widely replicable – these projects will inspire others to aim higher with their own developments, so driving improvement throughout their sectors and regions, and internationally.”

The winners of the GRESB/BREEAM Awards for Responsible Real Estate Investment were:

The winners of the BREEAM/Ecobuild Champions Awards, new for 2018, were:

The winners of the BREEAM Assessor Company and the three Assessor of the Year Awards were:

Finally, the winner of the YOUR BREEAM Award, decided by popular vote on the BREEAM website was:

The project attracted over 2,000 votes, with one voter describing the building as “sustainability and engineering in perfect harmony!”

This article was originally published here on 8 March 2018 by BRE.

Retrieved from "https://www.designingbuildings.co.uk/wiki/BREEAM_Awards_2018"
Create an article