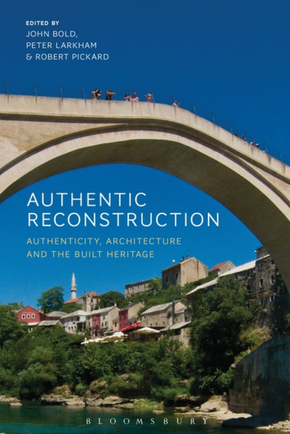 Recent decades have witnessed an increasing trend for the reconstruction of built heritage, whether in response to armed conflicts, natural disasters or accidents; and for peacetime historicist redevelopments to recover previous losses. At the same time, hostility to historical reconstruction remains strong within sections of the heritage community and the mainstream architectural profession, both of which insist on clarity of distinction between old and new, and ‘contemporary’ as the only ethical response for present-day interventions. At whatever scale, the concept of Authentic Reconstruction, the intentionally provocative title of this book, is anathema to these interests.

Through a wide range of case studies and discussions, framed within Western heritage orthodoxy and set primarily across Europe, Authentic Reconstruction promotes a nuanced case-by-case approach that eschews templates. The book recognises that historical reconstruction is going to happen, and aims at defusing dogmatism, positioning the heritage community centrally within the realities of community demand and the politics of reconstruction. Among the numerous questions posed by the editors and the authors in this highly topical compendium are ‘When is reconstruction admissible?’ and ‘How should it be done?’

The main focus of the book is historic cities rather than individual monuments. Post-second world war exemplars include the facsimile reconstruction of historic Warsaw, a culturally politicised act of defiance in response to an attempt to extinguish the Polish nation; and the recovery of the over-arching urban landscape (and the most important historic buildings) in Nuremberg as an expression of place identity, continuity following rupture, and an encouragement to displaced citizens to return. Examples of recovery following years of turmoil and targeted destruction in the former Yugoslavia include the reconstruction of historic bazaars in Cjakova and Peja in Kosova, where documentation fell short of academic expectations, but the vital socio-economic role of the bazaars in the life of the cities, supported by close involvement of the local communities, compensated.

Responses to natural disasters include delicate recovery in the provincial Italian city of L’Aquila following the devastating 2009 earthquake; and, across the Atlantic in Louisiana, the coordination of community initiatives in the aftermath of Hurricane Katrina and the associated flooding. Historicist redevelopments include the second-generation (post-socialist) reconstruction of Dresden city centre following the fall of the Berlin Wall, complementing the similarly latter-day reconstruction of the Frauenkirche.

Robert Pickard, in his chapter ‘Reconstruction after Fire’, highlights important UK examples such as the fires at York Minster (1984), Hampton Court Palace (1986), Uppark (1989) and the state apartments at Windsor Castle (1992), where the long-established approach of like-for-like replacement was followed, notwithstanding hardline resistance from the SPAB (Society for the Protection of Ancient Buildings) and others. Pickard affords special mention to the Glasgow School of Art where, following the 2014 fire (the book pre-dates the second and more devastating fire in 2018), the extent and quality of the archive documentation anticipated a fully authentic reconstruction of Charles Rennie Mackintosh’s library in all senses save material fabric. The considerable boost such post-trauma reconstructions provide to skills, provision and training across the heritage sector is also noted.

In discussions of the cardinal term ‘authenticity’, the editors question the validity of early post-war attempts to establish and insist on universal heritage principles, describing authenticity as a ‘contested’ and ‘culturally contingent quality’. They postulate the 1964 Venice Charter as the default position of international heritage orthodoxy, insisting inter alia on its preoccupation with notionally original material fabric (without acknowledging the more nuanced original French text of the 1964 Charte de Venise). They update this with reference to later texts, such as the 1994 Nara Document on Authenticity, and the 2013 revision of the Burra Charter, all of which promote balanced consideration of a range of attributes, such as function, memory, and spirit of place; and the Council of Europe’s 2005 Faro Convention, which articulates ‘the need to involve everyone in society in the ongoing process of defining and managing cultural heritage’.

The clear message, indeed challenge, that communicates throughout Authentic Reconstruction is that heritage professionals need to look beyond a focus on matters such as material fabric and unequivocal documentation if they are to position themselves as vital contributors to an accelerating trend in the built environment, one to which external critique is no substitute for broad understanding and engagement with the directly concerned communities and corresponding political realities. Post-conflict urban reconstruction across the middle east and north Africa region is one of today’s most pressing challenges, for returning communities and heritage professionals alike. Authentic Reconstruction, while not extending its reach to that region, offers vital transferable indicators of the genre of open-mindedness and commitment needed to nurture socially and culturally sensitive outcomes.

This article originally appeared as ‘Defusing dogmatism’ in IHBC's Context 161 (Page 59), published by The Institute of Historic Building Conservation in September 2019. It was written by Dennis Rodwell, architect-planner, consultant in cultural heritage and sustainable urban development.

Retrieved from "https://www.designingbuildings.co.uk/wiki/Authentic_Reconstruction:_authenticity,_architecture_and_the_built_environment"
Create an article