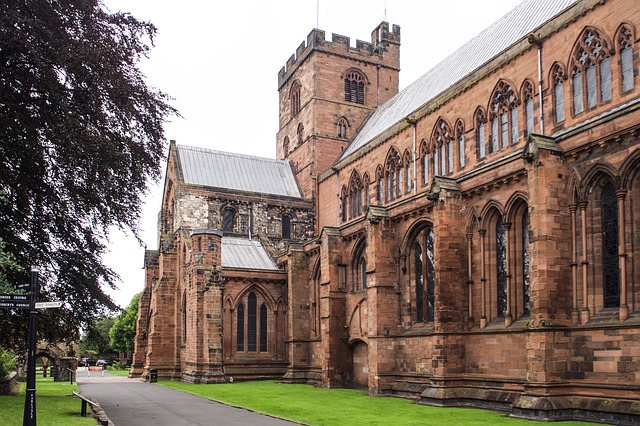 Carlisle's cathedral, small in scale but significant in many ways, played an important role in the region's long - and sometimes turbulent - history.

Carlisle cathedral was initially a modest Norman priory church built in 1122 over the ruins of an existing structure. Some portions of this Norman church remain in the south transept and two bays of the nave, although much of it has been destroyed or removed over the centuries.

Constructed from local red sandstone (which would prove to be an ongoing issue due to its tendency to become misshapen and discoloured over time), the church has gone through a series of changes. From the time it was constructed, the building’s piers slowly started to to lean as a result of subsidence, and its structural supports started to sink into the marshy land.

The first renovation began in the 13th century during the reign of Edward I who held his parliament in Carlisle and worshipped at the cathedral. These modifications in the Gothic style expanded the cathedral and changed its orientation. However, this work was severely damaged shortly after its completion in 1292, when a fire was intentionally set in the city by a man upset about a legal matter that was not decided in his favour. The fire spread to the cathedral and caused significant damage that took several decades to repair. However, the Norman tower subsequently collapsed onto the north transept.

By about 1350, one of the most important features of Carlisle cathedral was complete. The east window, with its elaborate tracery and glass, is still thought to be the largest in the Flowing Decorated Gothic style in England.

The east window is thought to be the work of Ivo de Raughton, considered one of the most accomplished architects of decorative tracery in Northern England at the time.

While the upper portion of the window is original, the lower nine sections were created by John Hardman and date from 1861. They were installed as replacements for medieval windows removed at the time of the Civil War.

[edit] The curse of Carlisle

Renewal of the monastic buildings continued in the 15th and early 16th centuries, but in 1525, there were new troubles in Carlisle. The city’s association with the Border reivers (a group of thieves and raiders who caused chaos along the border between England and Scotland), resulted in the Archbishop of Glasgow issuing a 1,000+ word curse on the city.

This legendary pronouncement became linked to misfortunes that occurred in Carlisle (including floods, diseases, business failures and even misfortunes associated with the Cathedral).

Like many churches, Carlisle cathedral was damaged during the English Civil War. The Scottish Presbyterian Army took the opportunity to destroy part of the nave and used the stones to fortify Carlisle Castle. They also demolished the cloister and chapter house during and removed a modest spire.

During the Jacobite rebellion, the remaining portion of the nave was briefly used as a prison, but no further damage was inflicted on the building.

Following several clumsy renovations during its nine century history, Carlisle cathedral was finally given an extensive restoration between 1853 and 1870. Undertaken by Ewan Christian (the British architect and one time president of the RIBA best known for his design of the National Portrait Gallery), this lengthy project preserved some of the original noteworthy characteristics of the building and added some new ones.

It was during this period that Owen Jones updated the ceiling based on the original medieval style. Considered one of the finest decorative artists of the period, Jones came up with a detailed motif that featured angels and stars.

The ceiling was most recently refurbished in 1970, and the east window was restored in 1982.

Retrieved from "https://www.designingbuildings.co.uk/wiki/Carlisle_cathedral"
Create an article