BS 7671 Requirements for Electrical Installations. IET Wiring Regulations, sets the standards for electrical installations in the UK. It is published by BSI and the Institution of Engineering and Technology (IET). 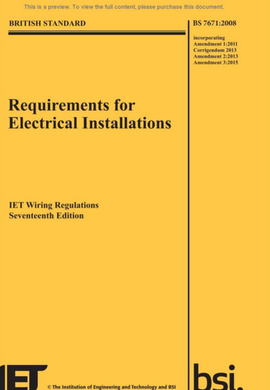 Amendment 3 came into effect on 1 July 2015, however, the changes in relation to consumer units did not come into effect until 1 January 2016.

From this point, consumer units and similar switchgear assemblies have to comply with BS EN 61439-3 Low-voltage switchgear and controlgear assemblies. Distribution boards intended to be operated by ordinary persons (DBO).

Consumer units are pieces of equipment located where the incoming mains supply is fed to the individual domestic circuits. It typically includes protection and isolation hardware.

The amendment in relation to consumer units has been made in response to the increase in the number of fires which are thought to have involved consumer units with thermoplastic enclosures in which arcing on cables due to poor electrical connections caused overheating.

The amendment requires that consumer units contain fires, either being constructed using a non-combustible material or being contained within a cabinet constructed using a non-combustible material. It applies to consumer units and similar switchgear assemblies inside domestic premises. It does not apply to non-domestic installations or to outside installations.

Retrieved from "https://www.designingbuildings.co.uk/wiki/Amendment_3_BS_7671_Requirements_for_Electrical_Installations_IET_Wiring_Regulations"
Create an article