We live in a world where rapid change and unmanaged growth is driving the collapse of established systems, be they top-down macroeconomic failures of the economies such as those of Greece and Spain in 2012, the bottom-up collapse of the housing markets in the United States in 2007–2010, or the escalating failure of infrastructures and buildings to provide adequate shelter during extreme weather events (see Figure 1). While seeking to avoid such collapses, we must understand where economic weaknesses and related breaking points exist and how to measure them. In rapidly evolving systems, we must efficiently draw on experience to grow in successful directions. This chapter tackles the challenges of creating such measures and explores the form they might take, using case studies from Arizona and the city of Dundee in Scotland.

Figure 1: The Warming of the Climate Will Exacerbate the Nature and Rate of Collapse of the Whole Gamut of Our Social and Physical Systems within the Built Environment. Strengthening of These Systems Is Essential to Improve Their Adaptive Capacities and Resilience to Collapse 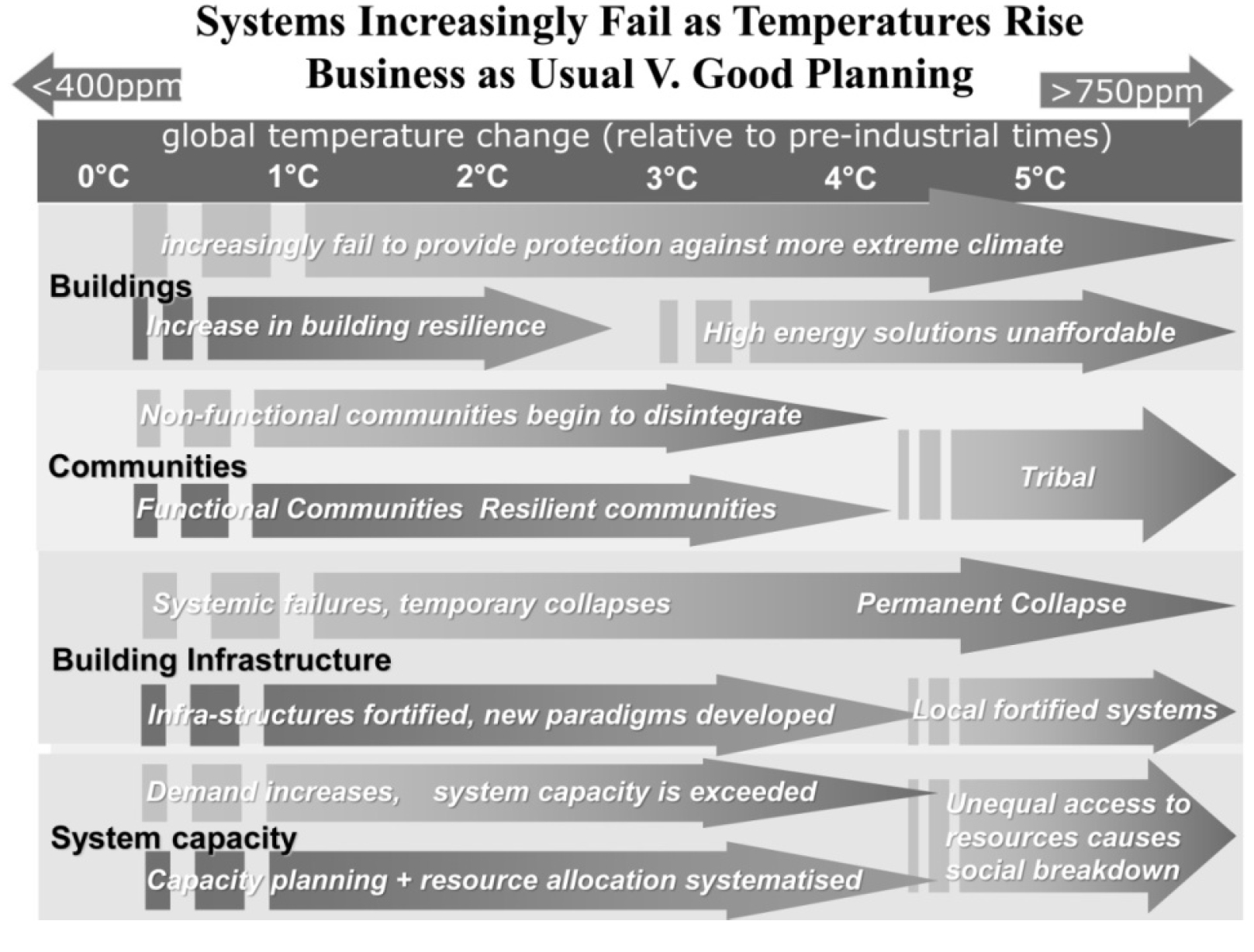 The chapter is divided into four parts. The first deals with concepts of resilience and adaptive capacity of individuals and populations within that built environment. Part two presents a case study of the failure of the Arizonan housing market in 2007–2010. This details the problem of asymmetric information, the ignorance by the majority of the potentially catastrophic impacts of rising energy, transport and water prices on their own household budgets, and raises the question of how this was allowed to happen in a so-called “responsible” society. Part three introduces the second case study of the city of Dundee in Scotland and a consideration of the role that solar technologies might play in alleviating fuel poverty in that city. The fourth and final part discusses the development of standardised metrics and indicators for describing the adaptive economic capacity of a population and testing the sensitivities of a group to a range of hazards that may threaten to cause the socioeconomic systems within which they operate to collapse. Such metrics and indicators would provide decision makers with the critical ability of testing policies and strategies against the capacity of the system to absorb stress and its breaking points under a range of different conditions. While so doing, such metrics can be used to inform successful adaptation strategies for different populations.

The conclusions clearly point to the social and economic benefits of moving towards facilitating the adoption of wide-scale use of solar energy for domestic populations to reduce economic stress upon them and prevent the collapse of regional housing markets and with them their attendant communities....

This paper was entered into a competition launched by --BRE Group and UBM called to investigate the link between buildings and the wellbeing of those who occupy them.

Retrieved from "https://www.designingbuildings.co.uk/wiki/Transitioning_to_eco-cities:_Reducing_carbon_emissions_while_improving_urban_welfare"
Create an article