In October 2015, the Association for the Conservation of Energy (ACE) published a briefing paper; The Cold Man of Europe – 2015, How the UK’s housing performs against comparable European countries in terms of fuel poverty and energy efficiency. It was written by Pedro Guertler, Jack Carrington and Antonia Jansz and followed the 2013 publication of Fact-file: The Cold Man of Europe, which found that fuel poverty was a major social crisis in the UK. 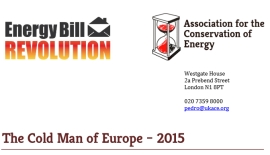 The paper sets the scene by explaining that the UK housing stock is the cause of 29% of our CO2 emissions and 27% of our final energy consumption, and that an estimated 4.5 million households are in fuel poverty.

It goes on to compare fuel poverty and the state of the housing in 16 European countries:

The paper found that the UK performed worst across a range of indicators:

It suggested that this poor state of repair was the main cause of these problems. Out of 26 million households in the UK, 21 million have a band D, E, F or G Energy Performance Certificate. G-rated homes have double the energy expenditure of the national average.

The paper proposed that, ‘The solution to this crisis is for the UK Government to designate home energy efficiency as an infrastructure priority and use infrastructure funds to deliver the stable, long-term investment needed to implement a locally-led infrastructure programme to upgrade all UK homes up to Band C on an Energy Performance Certificate.’

Retrieved from "https://www.designingbuildings.co.uk/wiki/The_cold_man_of_europe_2015"
Create an article