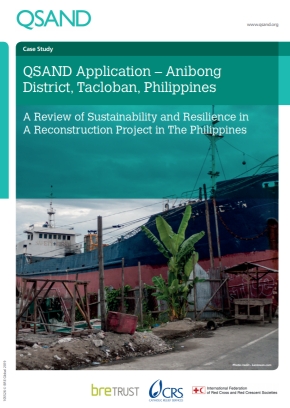 Super Typhoon Haiyan, known locally as Yolanda, struck the Philippines in November 2013. It is considered one of the strongest typhoons ever recorded with Category 5-equivalent winds and five to six-meter storm surges at landfall. It left neighbourhoods and infrastructure in ruins with over 1.1 million houses destroyed or damaged and over 12 million people affected.

Among the most devastated areas was the coastal district of Anibong in Tacloban, on Leyte island, where the super typhoon washed away or destroyed the vast majority of houses and local infrastructure. CRS, and its local partner Caritas Philippines, have been responding to the disaster since November 2013. CRS aimed to help 100,000 families in Leyte with the use of “build back safer” techniques to increase community resilience and support livelihoods in the area.

In the early stages of the Anibong Resettlement Project CRS used QSAND (Quantifying Sustainability in the Aftermath of Natural Disasters) to support their sustainability and resilience planning and implementation activities. QSAND was used to review and help identify any gaps in their programme with the aim of enhancing activities where appropriate. This took the form of a preliminary QSAND assessment during which all QSAND assessment and cross cutting issues were reviewed and considered.

Yetunde Abdul, QSAND Programme Manager said: “Hearing from CRS that QSAND prompted thinking and discussion about enhancement of existing or consideration of new approaches exemplifies how QSAND can benefit the development of reconstruction projects.”

The outputs of the QSAND application in the project have been captured in a case study now available on the QSAND website here.

Tulio Mateo, CRS Technical Advisor for Shelter and Settlements said: “The Haiyan response makes me feel very proud for many reasons. We facilitated an integrated recovery process for thousands of people, giving them options to choose from. This sounds easy but it is not. It is a process that takes time and patience, and not all organizations take the time to do it, and we did.”

The QSAND Team was pleased to contribute towards efforts to enhance sustainability and resilience in the Typhoon Haiyan response.

The article was written by George Foden was originally published on 11 February 2019 on the BRE Buzz website.

Retrieved from "https://www.designingbuildings.co.uk/wiki/Reconstruction_following_typhoon_Haiyan"
Create an article