In January 2017, the online architectural platform Eleven announced the winners of an ideas and design competition - Moontopia.

Moontopia was an international challenge exploring design-led solutions for space architecture. Students, architects, designers, artists, academics and scientists from around the world were asked to propose visions for a self-sufficient lunar colony for living, working, researching and space tourism.

The winning entry was: 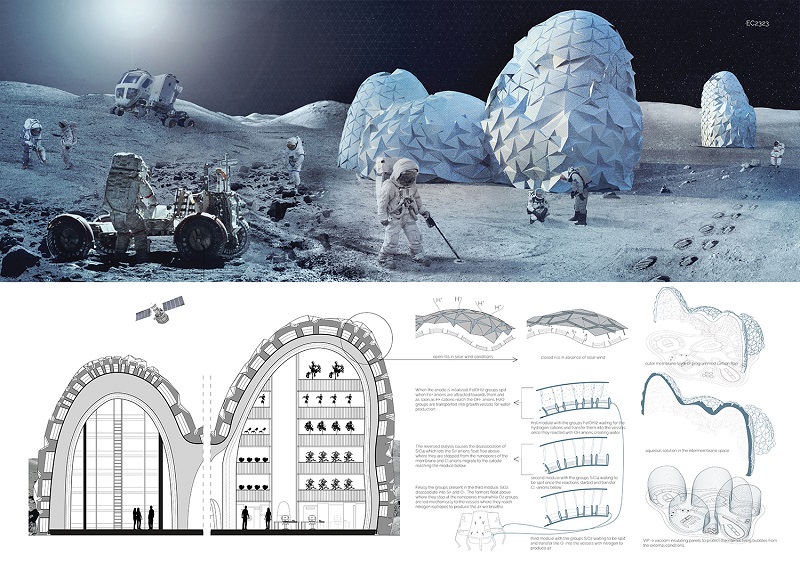 A medium-scale lunar colony, Test Lab is a base in the frontline of space exploration and lunar colonisation. The team developed a design which acts as an initial location on the Moon to conduct further testing on a satellite. The architecture grows and constructs itself through a form of 3D printed self-assembly, gradually colonising the Moon over time.

The most important element of the Test Lab is the outer membrane. Based on a simple origami pattern and made of programmed carbon fibre, it has the ability to re-shape itself when it senses pressure variations in the solar wind. 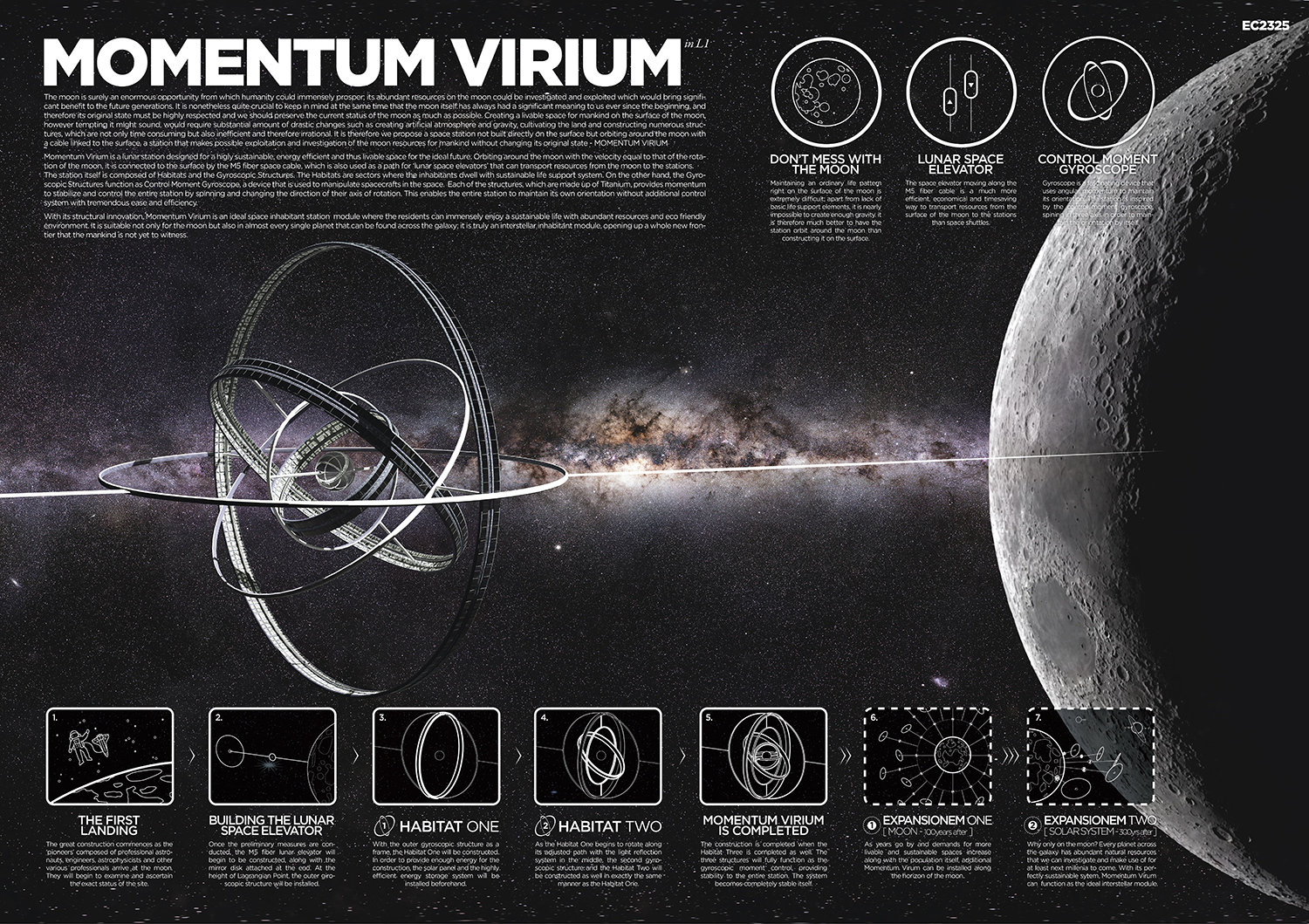 This team set their Moontopia in lunar orbit rather than on the surface of the Moon itself. A space elevator links the man-made space-city with the natural satellite: a sensitive and elegant solution which mixes poetry with science-fiction.

The team reasoned that creating a habitable space on the surface of the moon would require a substantial amount of time consuming, inefficient and irrational development. So they proposed a space station orbiting around the moon with a cable linked to the surface. The station makes it possible to investigate and exploit the moon's resources without changing its original state.

The people’s choice award was given to: 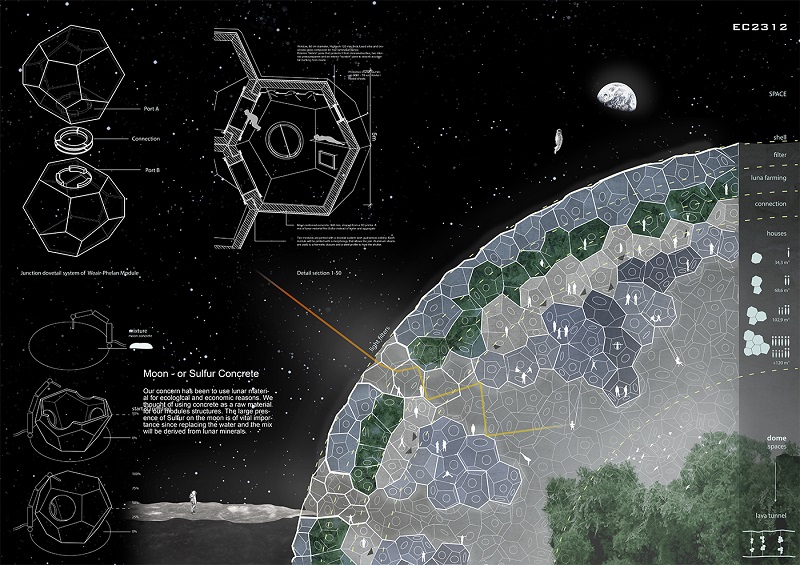 The public’s favourite is designed as a unique form. A so-called aggregation system Weair-Phelan structure gives shape to an expandable landscape which could accommodate Moon dwellers in relatively economic, sustainable and simple spaces.

Modular in nature, Modulpia would grow organically over time and, by employing bioregenerative strategies, would be able to provide its own food, plants (for CO2 removal and oxygen production), and drinkable water.

Several other entries were commended, including: 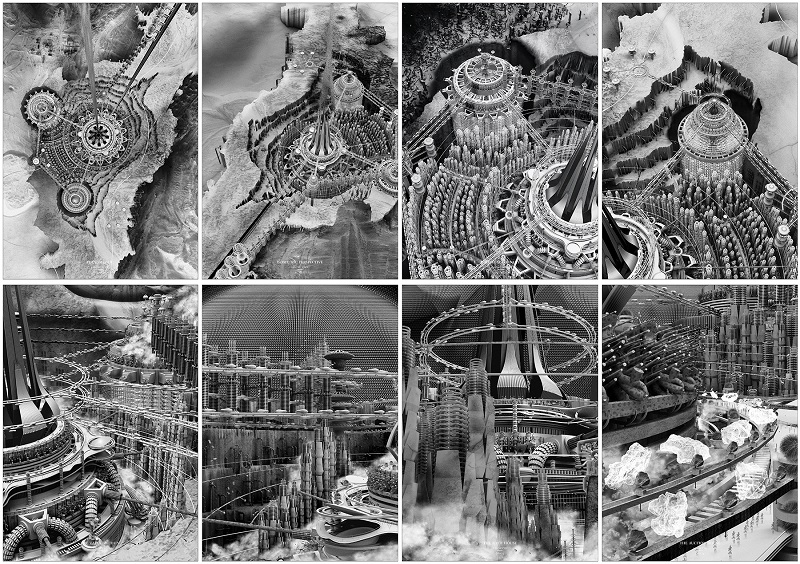 The fantastic graphics of this entry are matched by extensive research. In its form alone, Platinum City is a fantasy-driven utopia. It is a new extraterrestrial urban model based on cutting-edge science and technology that is actually available today. Could this be a vision for what living on the Moon at a large-scale would actually look like?

The self-sufficient lunar colony is a city fathomed as an organic computer, with its grandiose, drone-crafted asteroid regolith architectures engorged on wet technologies and anchored to the platinum rich Rosetta Asteroid by a fragile tether of carbon nano-tubes. 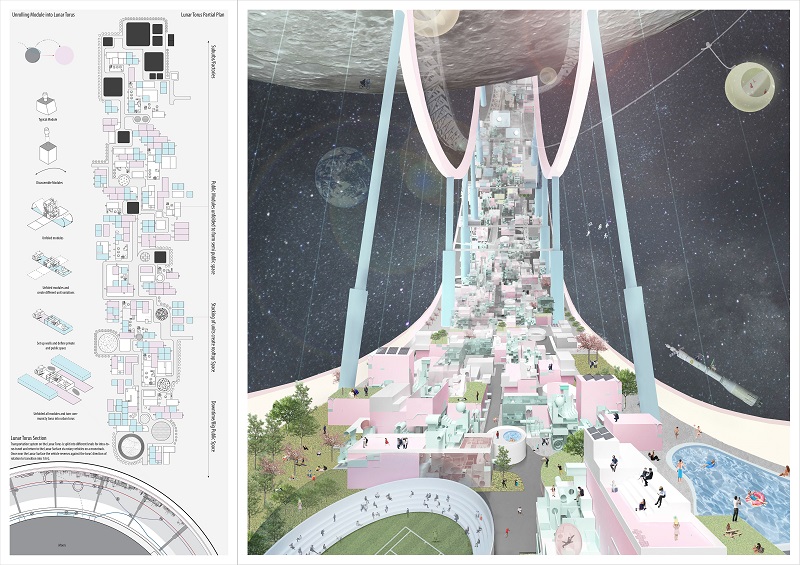 There is clearly a lot of passion, thought and work behind this beautiful design. In Upside Down, the design team has set out a plan for interplanetary exploration and subsequent colonisation of their real objective: Mars. The Moon is used to gather experience and resources; a sort of test and training site for a bigger galactic goal. 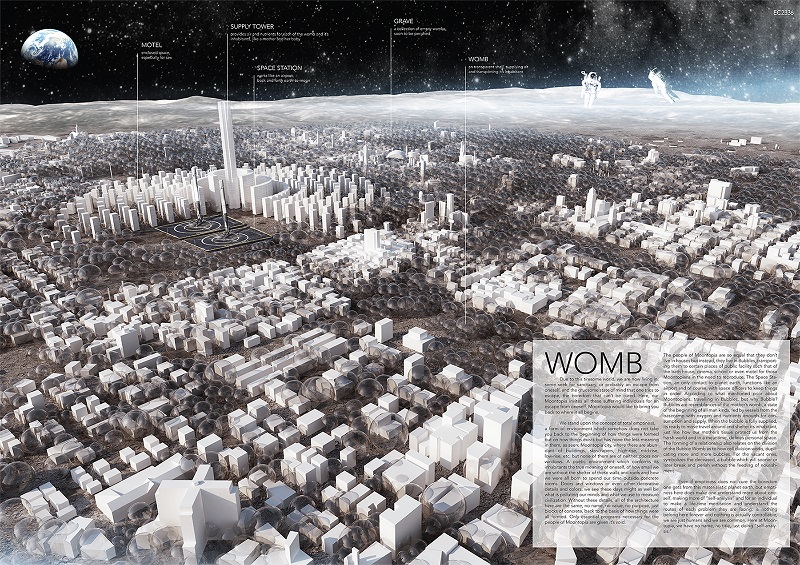 In this design, the Moon becomes an almost ego-less meditation ground. An escape from the hustle and bustle of everyday life on Earth which drowns our senses and generates stress. In Womb, the Moon becomes a place of contemplation, where mankind can seek out the deeper meanings of human consciousness. And for those times when meditation and contemplation are not enough, WOMB provides a space-motel catering for more ‘animalistic’ human needs.

To see them all see Eleven Magazine.

Retrieved from "https://www.designingbuildings.co.uk/wiki/Lunar_architecture"
Create an article