Improving quality in the built environment

On 12 December 2018, the Chartered Institute of Building (CIOB) was joined at a parliamentary reception by MPs and senior industry figures to launch a new report Improving Quality in the Built Environment. 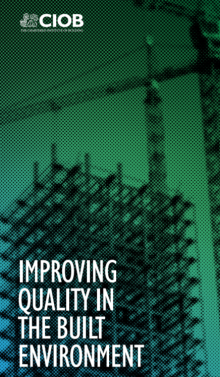 The event, hosted by Eddie Hughes MP, heard about the outcomes of CIOB's Construction Quality Commission, set up to identify what promotes or prevents the delivery of quality in construction and what steps are needed to bring about change.

Hughes commented that we have now reached a point where a culture of “health and safety is the way we work” and called for "that same cultural shift with regard to construction quality.”

Paul Nash FCIOB, Chairman of the Commission, said; “Quality, or rather the failure of quality, is arguably the most important issue facing the construction industry today... Our research identified … an underlying cultural issue in the industry. Quality was being sacrificed to achieve targets.” He then spoke about one of the key outcomes of the Commission’s work, the forthcoming Code of Quality Practice:

“Today we are announcing the launch of a consultation on the Code.” The intention behind this is to set standards for the industry to achieve and “provide practitioners with the tools and processes needed to deliver quality on construction projects.” He concluded by saying: “There is never an excuse for poor quality.”

Roberta Blackman-Woods, MP for the City of Durham and Shadow Minister for Housing, Communities & Local Government, welcomed the CIOB’s report, saying: “I think the work you are doing is really important and I’m glad to see that improving the quality of the built environment has gone up the political agenda.”

The CIOB’s Construction Quality Commission was launched in early 2017 in response to a report into defects that led to the closure of a number of Edinburgh schools. It was given a new impetus following the tragic Grenfell Tower fire. The Commission, led by a group of the CIOB’s Past Presidents, worked with members and other industry organisations to identify the main issues with regard to quality in construction.

You can see the report at: Improving Quality in the Built Environment

Retrieved from "https://www.designingbuildings.co.uk/wiki/Improving_quality_in_the_built_environment"
Create an article