Record breaking summer temperatures in some European countries, an exceptional rainy season in south east Asia, trade wars and devolution of local currency in Latin America and Turkey all played a role and will continue to do so.

'Scorching summer' temperatures in Northern, Western and Southern Europe have stimulated demand for air conditioning units while Eastern Europe has struggled with rainy weather this year.

Small residential splits are expected to close the year with growth ranging from 10% to 25% in volume in the key 5 European markets (France, Italy, Russia, Spain and UK) in 2018. However, Europe’s third biggest splits market, Turkey, is expected to contract due to rainy weather and a rapidly falling Turkish lira.

“This growth was also mirrored in larger commercial splits systems. In addition to heatwave replacement, refurbishment, activity in new build and the launch of new refrigerants were also factors. The VRF market is expected to grow significantly this year except for the Russian and UK markets. A struggling retail market is failing to support the sales of rooftops in key European markets.

"The resumption of growth in construction activities started to benefit chiller markets apart from the UK and Turkey. Uncertainties over Brexit are having a negative impact on the office market.

"The Eco-design directive is increasingly pushing demand towards inverter screw and scroll compressors. Thus, the total value of the market will hold up better than volume.” 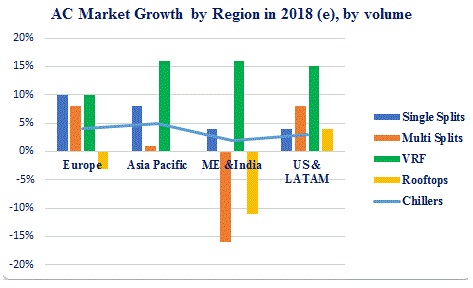 Another hot summer in China has benefited the small splits market. However, growth is expected to be much slower than for the previous year. The Chinese market accounts for more than 50% of global splits sales by volume in 2018. Its slowdown will certainly have an impact on the global trend.

The growing middle-class population has developed a taste for mini-VRFs (variable refrigerant flow) which is pushing the sales of smaller systems. Despite this, overall growth for VRF is expected to be slower than for the previous year.

The poor summer in Thailand limited the growth in the splits market whereas the VRF market is expected to grow considerably with strong demand coming from food chain stores such as Starbucks.

Low domestic demand in Australia in the first half of 2018 compared to the same period in the previous year caused the market to contract. The light commercial splits market has been impacted by a slowdown in construction of luxury flats. The VRF market is expected to show modest growth in 2018.

Disappointing sales for splits during March, April and May 2018 in India were mostly due to bad weather. From the second half of May and June, sales were reported to be improved and heading towards a positive year end.

2019 is expected to be a dynamic year with new energy-efficiency legislation coming into force for chillers and with upcoming elections.

The Saudi Arabian AC market is expected to contract; the construction industry is still slow and while the macroeconomic situation started to improve in the first quarter of 2018, there are many project delays throughout the Kingdom.

The UAE AC market is expected to grow in 2018 on the back of economic growth, driven primarily by recovering oil prices and by an upswing in investment ahead of Expo 2020. Despite this, most of the Emirates are suffering from a lack of new mega projects.

The import of ACs in Iran is being obstructed by the government due to a shortage of hard currency which, in turn, has led to a spike in purchases of high-wall splits due to concerns over future supplies. The country faces increased pressure from the US and looming sanctions after President Trump’s decision to withdraw the United States from the 2015 international deal over Iran’s nuclear program.

[edit] The US & LATAM (Latin America)

The US ducted splits market, which is the main market in the US, is expected to close the year with more than five per cent growth which has been driven mainly by a combination of vigorous demand and discounting of end of line inventory. However, on the supply side, prices are set to increase significantly following the tariffs imposed on aluminium imports from China.

On the commercial side, maxi VRFs maintained their sustained growth rates. On the other hand, the rooftop market was more subdued. New construction starts in most verticals started to push the sales of chillers in the first half of the year.

Dickson siad; "Despite some growth in the Mexican AC market, suppliers were disappointed as this was still nowhere near what was expected. The main reasons behind slack growth were mild weather, the economy, the fall in value of the peso, political uncertainty and international tensions with the US. This situation was mirrored in Argentina when the Argentine peso started to lose value against the US dollar in May. Worry over the level of dollar debt made investors nervous. This was felt by the AC market which experienced a sharp drop in 2018.”

This article was originally published here in October 2018 by BSRIA.

Retrieved from "https://www.designingbuildings.co.uk/wiki/Global_Air_Conditioning_Study_2018"
Create an article