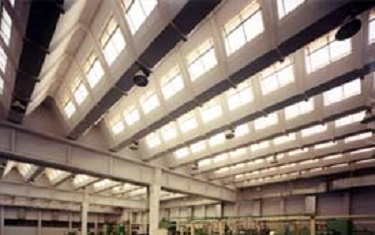 Folded plate structures are assemblies of flat plates, or slabs, inclined in different directions and joined along their longitudinal edges. In this way the structural system is capable of carrying loads without the need for additional supporting beams along mutual edges. This technique originated in Germany in the 1920s and became popular in Russia and the United States during the 1930s to construct roofs for industrial warehouses and public buildings.

Modern folded plate structures are typically made of cast in situ or precast reinforced concrete, or steel plate.

They can provide a multitude of shapes and overall forms:

There are several benefits of folded plate construction. They are simpler to manufacture than other shells such as cylindrical shells, with relatively simple formwork required, and usually use less material. However, folded plates require more materials than curved shells since there is normally more bending involved.

Folded plate structures have an intrinsic rigidity and high load-carrying capacity which makes them economical over long spans that need to be free of internal columns and other obstructions.

hello, may i know who is the author for articles that write about folded plate construction?

Its a wiki site.