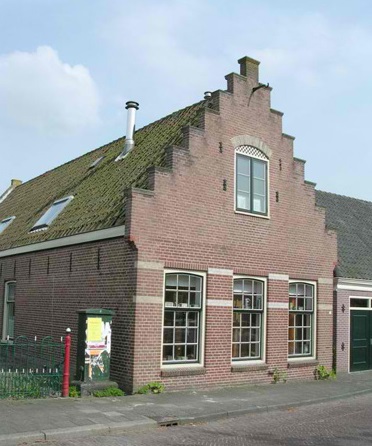 A crow-stepped gable, also known as a stepped gable or corbie step, is a design for a building’s triangular gable end. It takes the form of a stair-step pattern at the top of the stone or brick parapet wall which projects above the roofline.

Used as decoration, as well as being a convenient method for finishing brick or stone courses, crow-stepped gables were traditionally used on Dutch houses, Danish medieval churches, and Scottish buildings dating back to the 16th century. They were also a feature of the northern-Renaissance Revival and Dutch Colonial Revival styles of 19th century America.

Crow steps are commonly made of sandstone or brick, which, due to their porosity, generally have to be capped with lead or a stone coping, or sealed with other materials.

In addition, as the roofing slates do not reach the outer face of the gable with crow steps, several techniques had to be employed in order to maintain the water-tightness, including:

Retrieved from "https://www.designingbuildings.co.uk/wiki/Crow-stepped_gable"
Create an article