This article was originally published by ICE on 17 May, 2018, written by Rod Powell. https://www.ice.org.uk/news-and-insight/latest-ice-news/cafe-200-success 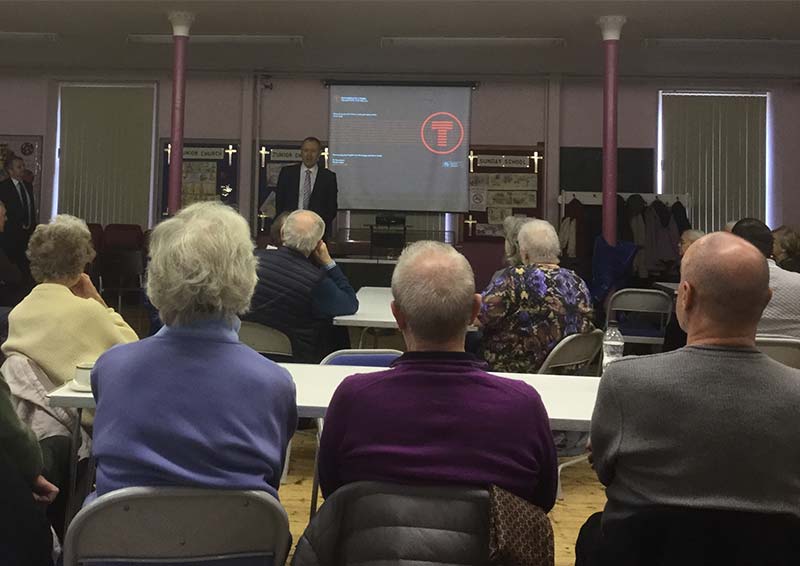 Part of the ICE 200 celebrations, Café 200 is a series of regional talks to ‘coffee morning’ groups that explain how civil engineers transform lives. Civil engineers have given talks to a broad range of groups including the University of the Third Age, church groups, the Rotary Club, local museums, Café Scientifque and even a motorcycle club.

South West has hosted talks in partnership with the University of Plymouth’s School of Engineering, as well as family activities that have explored the breakwater and Plymouth’s engineering heritage.

These Plymouth-based events have engaged with more than 300 people while a graphic display that looks at ‘Lighthouses, Bridges and Breakwaters’ has been visited by hundreds more on at the local House of Fraser store.

In May a talk was given about the life of 19th century civil engineer James Meadows Rendel at the Plymouth Athenaeum.

Regional Director Glen Owen gave a presentation on ‘How to build a bridge’. 60 members of Harpenden’s University of the Third Age learned about the political and social aspects of bridge building before he explained the different bridge forms, materials and some of the different approaches to bridge construction.

Attendees heard about some of the historical bridge failures such as the Tacoma Narrows suspension bridge and the first Tay rail bridge. Glen explained how the lessons from the past inform not only what to avoid but how the application of new technologies into civil engineering can be safely introduced.

Bob Daimond FICE is giving a series of talks about the Menai Bridge around north Wales which are delivered in either English or Welsh. Over 70 members of the Chester Society for Landscape History listened to his ‘Crossing the Menai’ talk. The Menai Bridge’s heritage is also the subject of his talk to the Friends of Storiel – the museum and art gallery that has an exemplary model of the Menai Bridge. Bob has also given a lecture about civil engineering in north Wales over the past 200 years, many of which are on the Panel for Historic Engineering Works.

Also in Wales, Stephen Jones has added a Café 200 introduction to his regular talks to various organisations – such as engineering heritage’s contribution – given to the Wenvoe History Group. Stephen has given numerous Café 200 themed talks based around his knowledge of Brunel that have drawn audiences of around 100 people. This includes the Chepstow Society, Bristol based Newcomen Society, the Endeavour club in Cardiff and the Rhoose & District History Society.

In June Stephen will give his Café 200 themed talk ‘From NY to London via Abermawr’ to the International Civil Engineering History Session at the 2018 Canadian Society of Civil Engineers in New Brunswick along with a Cafe 200 presentation. Further talks on this and Brunel in south Wales are planned for the second half of the year.

Jonathan Bradshaw brought civil engineering to life for a group of four-year-olds at Moneyrea Nursery. Civil engineer Jonathan, who works for South Eastern HSC Trust, began by explaining how civil engineers make life possible. He asked questions like “who brushed their teeth this morning?” to explain the water network and “who came to school by car?” to tell the children how civil engineers designed and built the roads.

The group also did a hands-on activity building towers out of uncooked spaghetti and marshmallows. The children also learned an important secret – that civil engineers are actually invisible superheroes who keep us safe. They each took an ICE Invisible Superheroes activity pack to learn more. “When I asked them at the end what a civil engineer does they said ‘invisible superhero’,” Jonathan says.

Retrieved from "https://www.designingbuildings.co.uk/wiki/Caf%C3%A9_200"
Create an article