The BRE Innovation Park in Watford was created in 2005 to test and demonstrate the buildings of the future. It is home to some of the world’s most sustainable buildings, landscape designs and low carbon materials and technologies.

In September 2015, BRE launched two new demonstration housing units brought to market by Üserhuus AG and Tigh Grian Ltd, which they describe as ‘affordable, energy-efficient, quick to build volumetric housing solutions’. They are built to the Scottish Building Regulations Gold Standard and are intended to demonstrate the potential of super-efficient, factory-finished, configurable dwellings. 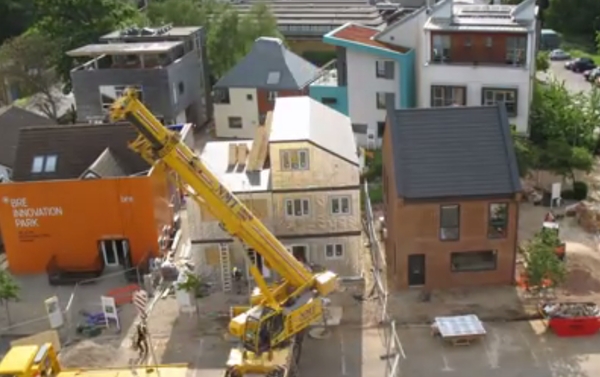 [Image links to YouTube footage of the installation process]

The volumetric units were factory built in Wales, including services, fittings and decoration. The 4.9m x 11.4m modules were then transported by lorry to be laid on pre-prepared foundations. They can be assembled into units of up to five storeys in detached, terraced, tenement, semi-detached and four-in-a-block configurations.

The units use a structural insulated panel system (SIPs) and include a whole-house mechanical heat recovery ventilation (MHVR) system, with wall-mounted electric panel heaters and achieve an EPC (Energy Performance Certificate) B rating.

The standard house types aim to deliver energy bills estimated at £300-500 per annum for energy and space heating, and with the addition of a building-integrated, photovoltaic “terra cotta” roof can produce supplementary energy.

The units cost less than £1000 per square meter, and, being prefabricated, can be ready for occupation sooner than traditional housing, generating an early revenue stream for developers.

Director of the BRE Innovation Park Dr David Kelly said, ‘We have a chronic shortage of housing in the UK – we need to deliver 250,000 homes a year to meet market demand – last year we managed 118,000, less than half. We need to find new and better ways to deliver and these homes are a step in the right direction.

What is really impressive about the home aside from its affordability and sustainability is that it reduces end to end construction time by half, so 8 weeks from factory to completion on site – currently the average home takes a minimum of 16 weeks to build. This approach could really help us make significant progress with volume delivery.’

Dr. Stephen Wittkopf, Managing Director, Üserhuus AG, commented ‘The future of architectural design lies with the integration of renewable energy technologies. The project on the BRE Innovation Park is showcasing a first-in-the-UK integrated, terracotta style cladding and roofing PV system which points the way for future housing – we are looking forward to seeing how it performs….’

The Üserhuus/Tigh Grian concept has been commissioned for use on a 50 unit housing development in Alva Scotland, with construction starting later in 2015.

Retrieved from "https://www.designingbuildings.co.uk/wiki/BRE_%C3%9Cserhuus"
Create an article