It is perhaps the most staggering piece of artwork in the whole of human history, renowned for its accuracy in the depiction of the human body. Anyone who has seen it up close comes away in awe of the fact that someone had the ability to carve such a piece from stone.

Now, imagine, that one day we will see a 3D printer that could print Michelangelo’s David utilising concrete and other advanced materials – and that if such a statue would be placed next to the original, most people would be unable to tell the difference!

Science fiction? Not to me.

That was one of my messages in my March 2017 keynote for the American Concrete Institute, with with over 1,000 executives from this industry in the room.

My job was to outline for them the opportunities that will come to the industry from embracing fast paced trends. And I put on the table for them the idea that the boldest goal in their industry would be accomplished when someone was able to print Michelangelo’s David utilising a 3D printer.

It’s perhaps the equivalent of the well known Turing test, which is the ultimate challenge with computer technology — could a computer have the ability to exhibit intelligent behaviour equivalent to, or indistinguishable from, that of a human?

Farfetched? No. In fact, computer companies have been pursuing the goal of the Turing test in a feverish race.

This same thing will happen in the concrete industry with 3D printing — indeed, it’s a bold goal that some people are already thinking about in terms of the transformative trends sweeping the industry today.

Every industry has, or should have the equivalent of a Turing test. Think about robotics – how quickly will this industry mature? I toured a robotics display at a museum in Philadelphia, and one display suggested that there should be a 'Jetsons goal for robotics –the industry will have matured when it can build a robot that will be accepted by a family, just like Rosie the Robot from the popular 1960’s television cartoon.'

Here’s the thing — we might see these big bold bets be achieved sooner rather than later. I continually emphasise to my clients that the future is happening all around them, and that it’s happening faster than they think.

In China, an entire 4,305 sq. ft, 2-storey home has been printed with a 3D printer, with walls as thick as 8 ft and with 9 ft ceilings. It took 45 days from start to finish, and was printed in one go at the building site.

Consider this office building in Dubai which was printed in concrete using a 3D printer. 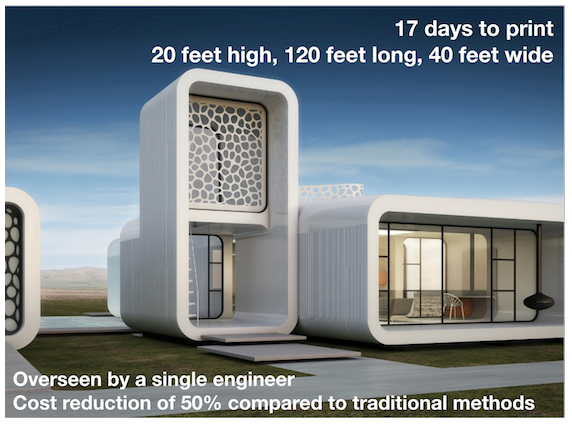 There are fascinating trends which come from the ability to 3D print with concrete. We can get more flexible designs, with concrete that is warped or twisted. Waste is significantly reduced, new design concepts are suddenly possible, and we can cut down on the cost of manufacturing.

People are talking about the fact that it will lead us to an era in which we can 'design for deconstruction' — printing in such a way that when a building is eventually decommissioned, we can dissassemble it rather than blowing it up!

Where is the world of construction headed? Consider this:

Your future home might be planned using virtual reality, built with a 3D printer and inspected by a robot for quality. What may sound like a sci-fi movie could become reality in a few decades as Singapore ramps up its construction productivity and employs more efficient building methods. Building with speed and quality through high-tech, Straits Times, Hong Kong, October 2016

Of course, 3D printing is already passe, I pointed out to my audience at the American Concrete Institute: people are already talking about 4D printing — which has materials that can change shape depending on the environment they are in!

Bottom line? Consider this comment by architect James Gardiner: “Using 3D-printed wax moulds for concrete components, we will have a completely different paradigm. This is transformative technology”.

What’s the Turing test or Michaelangelo’s David in your industry? And are you prepared to think in a big and bold way to get there before others do?

Jim Carroll is a futurist, trends & innovation expert, with clients that range from NASA to Johnson and Johnson, the Swiss Innovation Forum to Whirlpool, speaking at approximately 50 events worldwide each year. He has an extensive blog at www.jimcarroll.com, and you can follow him on Twitter @jimcarroll

Retrieved from "https://www.designingbuildings.co.uk/wiki/3D_printing_Michelangelo%27s_David_in_concrete"
Create an article