[edit] What is wrought iron?

Wrought iron is a very low carbon metal made by intensive hand work using small scale production methods. Predominantly, it was manufactured prior to the Patent for the Bessemer process in 1856.

There were numerous methods for producing wrought iron; early iron is often referred to as Charcoal iron, or Bloomery iron, because it was produced in small blooms. In the late 18th century more efficient Puddling furnaces were used to produce Puddled wrought iron. Many other types of production methods were used across the world, all of which produced varying qualities and quantities of iron.

Confusingly, the term 'wrought iron' can also be applied to decorative hand made steel artefacts because wrought means to make by hand (to wrought). However, a more generally accepted description for these hand made steel items is decorative ironwork. 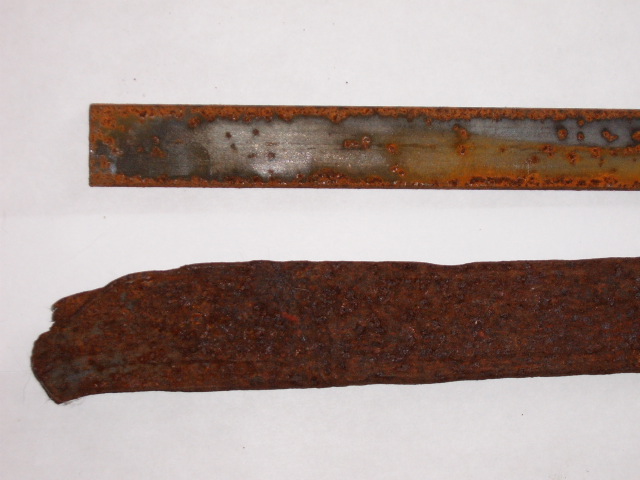 There are four ways in which wrought iron can be identified by using a comparison method:

Microscopic analysis will more accurately determine if the metal is iron or steel.

Clearly there are visual differences between steel and early wrought iron due to the wood grain effect of the latter. Wrought iron from all periods, and production methods, could take on the same appearance as mild steel if it was repeatedly worked to refine it; furthermore, once painted the visual differences are less apparent to the naked eye.

The structural performance of wrought iron cannot be compared with mild steel, despite the 1938 British Standards (BS 762-1938) because, without reliable records, there is no definitive way of knowing the provenance of the specific wrought iron as found. Analysis from Brunell's iron ship SS Great Britain 1843, by Dr R. Walker in 2002 showed that the mechanical properties were '..considerably poorer than those tolerated for mild steel.'

Corrosion resistance was investigated in 1952 by Chilton and Evans who concluded that even the very best quality wrought iron had not shown '...phenomenally good resistance to corrosion.' earlier investigations by the Hudson Corrosion Committee reported similar findings. There is some evidence that the presence of nickel in the iron ore when smelted, may have an influence over corrosion resistance; ores from Sweden and Greece tended to contain higher levels of nickel in the iron ore (Tylcote 1972) and showed barriers to corrosion.

This enquiry should inform decisions regarding the most appropriate methods for the longevity of exposed ironwork.

Corrosion generally takes place at the crevices where the iron is joined. Crevices tend to put stresses on the coating at these junctions causing water to ingress and be trapped, sometimes by the coating itself. Current thinking advises the use of flexible or mobile protective coating to accommodate this expansive action.

In some cases it may be beneficial to control corrosion rather than attempting to stop it. Cardiff University has been contributing to the conservation methods used to preserve Brunel's SS Great Britain using one such method. http://www.cardiff.ac.uk/share/research/projectreports/ssgreatbritain/index.html

[edit] Availability of wrought iron and alternatives for consideration

Wrought iron is still available as recycled iron; the last production of virgin wrought iron from iron ore was in 1974. Good conservation will consider repairs in wrought iron, mild steel, weathering steel (CORTEN), pure iron and other ferrous and non-ferrous metals. The specification should be informed by an experienced professional who can explore all the options and provide good justification for the choice.

The potential for bi-metallic corrosion should always be checked before using dissimilar metals. https://en.wikipedia.org/wiki/Galvanic_corrosion

For practical assistance and advice the following organisations can be contacted:

An excellent and informative entry on wrought iron, thank you.