On 1 November 2016, it was announced that development of 'The Broadway', described as the biggest property deal since Brexit, was commencing with the official handover of the former headquarters of New Scotland Yard in Westminster to new owners, BL Development Limited, an investment vehicle controlled by ADFG.

ADFG acquired New Scotland Yard in December 2014 for £370 million. Planning permission was granted for the proposed development in April 2016. Property developer Northacre has been appointed to undertake construction of the new scheme, which is expected to be completed in 2021.

The Broadway’s six buildings will provide 485,000sqft of residential, 146,000sqft of commercial and 37,500sqft of retail space, as well as a 20,000sqft public realm linking Victoria Street with Broadway Street.

ADFG CEO Jassim Alseddiqi said; "The Broadway represents the future of urban living, a thriving destination to live, work and play in a world class address surrounded by unparalleled views of London's most famous landmarks."

Northacre CEO Niccolò Barattieri di San Pietro said; "The official handover of New Scotland Yard marks the beginning of the first phase of its development. The Broadway is an important milestone in Northacre's history; our first major mixed-use development which will set a new standard for London living, working and leisure."

Assistant Commissioner of the Metropolitan Police Helen King said; "By selling this building and moving our headquarters to Curtis Green, we're able to make savings to invest in frontline policing, improving the technological capability of the force and develop facilities like a brand new, state of the art police training centre in Hendon which was officially opened this month. This is a significant and exciting move for us and marks a new era of policing for the MPS." 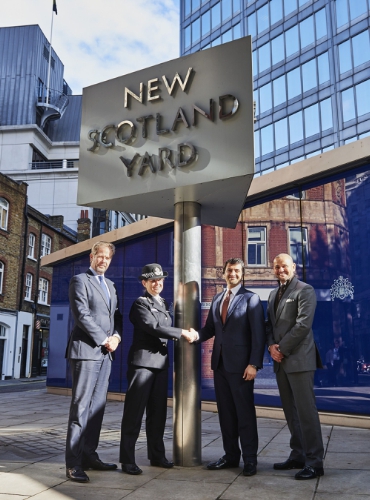 Retrieved from "https://www.designingbuildings.co.uk/wiki/The_Broadway,_Westminster"
Create an article