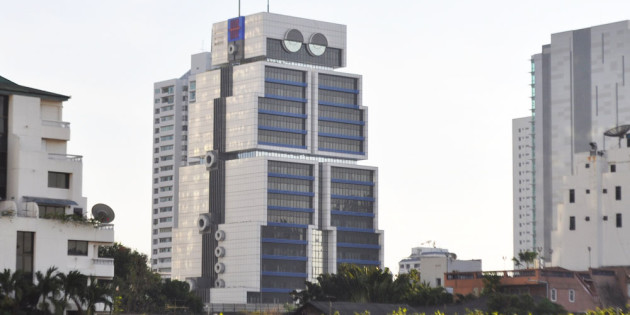 The Robot Building is the current headquarters of United Overseas Bank and is located in the Sathorn business district of Bangkok, Thailand. Since its completion in 1987, it has come to be seen as one of the last examples of modernist architecture in the city.

It was designed by the Thai architect Sumet Jumsai for the Bank of Asia, with the intention of representing the increasing influence of computer technology on the banking industry. He was apparently inspired by seeing his young son’s plastic toy robot. Jumsai wanted the building to be a reaction against high-tech postmodern architecture, which he saw as being “a protest movement which seeks to replace without offering a replacement”.

To achieve the robot-like appearance of the 20-storey building, the sides step-back progressively in stages. This design technique also served as an efficient solution to the setback regulations that required an 18-degree incline from each side of the property line.

Two antennae on the roof serve as communications and lightning rods. The eyes are provided by two 6 m (19.7 ft) reflective glass windows looking out from executive meeting rooms, with eyelids made of metallic louvers. The building’s sides are adorned with ‘steel nuts’ made of glass-reinforced concrete, the largest of which measure 3.8 m (12.5 ft) in diameter, making them the largest in the world at the time of construction.

Despite some detractors, the Robot Building remains an icon of Bangkok architecture, and was selected by Los Angeles’ Museum of Contemporary Art as one of the 50 seminal buildings of the 20th century.

Retrieved from "https://www.designingbuildings.co.uk/wiki/Robot_Building,_Bangkok"
Create an article