On 16 June 2015, think tank ResPublica, in partnership with GallifordTry, Peabody, Places for People and Trowers & Hamlins, published ‘Devo Home: A double devolution of housing to people and places’. The paper sets out proposals to tackle the housing crisis through the creation of new local institutions called ‘Local Place Partnerships’ that devolve housing to people and places. 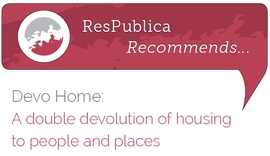 The paper points out that between 1948 and 1978, there were only 8 years in which English local authorities did not build more than 100,000 homes, with a high of 198,000 in 1953, but since 1979 there has been a sharp decline with local authorities delivering fewer than 15,000 homes a year from 1989, and a low of just 50 in 1999. It suggests that the challenge lies in '...delivering new and affordable homes in places where people want to live, where they will flourish, and promote ongoing investment and community engagement.'

The paper suggests that home building could be accelerated by bringing together developers, housing associations, residents, civil society and local businesses to address their concerns and wishes through one decision point, allowing people to take control of housebuilding and shape the future of their neighbourhoods. It argues that this could dramatically increase the supply of new housing.

Director of ResPublica, Phillip Blond, said, “For too long, housing policy has been controlled by Whitehall, and the lack of local authority involvement has been a primary driver behind the failure to build new homes at the scale needed. The only way that we will mitigate the Whitehall ‘command and control’ model, and an old local authority led model is by introducing a new institution that draws a wide range of partners together to coordinate the building of genuinely affordable and aesthetically pleasing homes, and provide the infrastructure needed for communities to thrive.

“Local Place Partnerships can offer the ecosystem of support and single point of decision making needed to ensure the swift delivery of the homes we need.”

Retrieved from "https://www.designingbuildings.co.uk/wiki/Local_place_partnerships"
Create an article