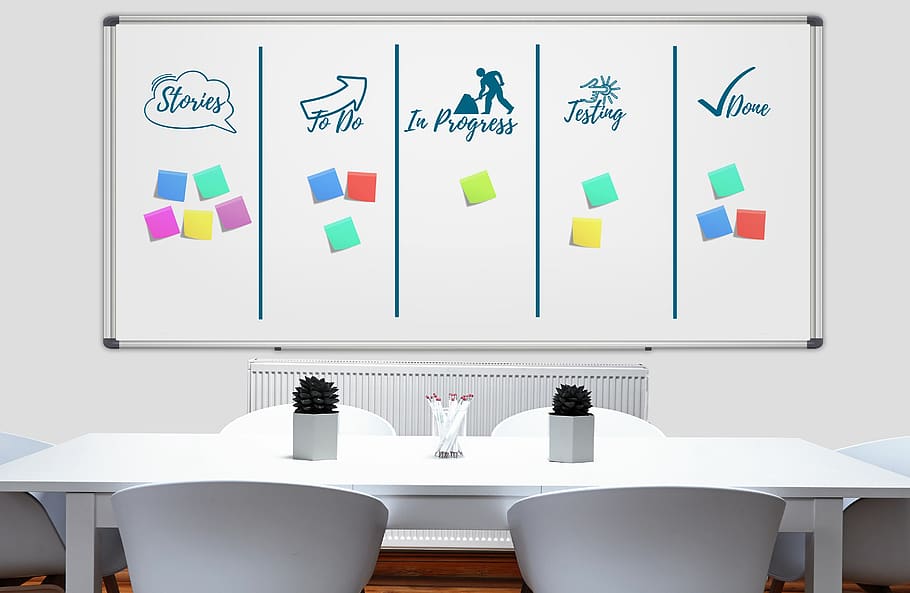 Kanban is a project management technique that uses tools such as billboards or signs to document and streamline the various steps in processes. This scheduling system uses the visual indicators (which can be either physical or digital) to identify and prioritise demands and then realistically assign resources.

Kanban is the Japanese word for billboard. The kanban method of project management came as a byproduct of Toyota’s just in time manufacturing approach introduced in the 1940s.

Kanban became popular in the 21st century as a computer software development method. Since the middle 2000s, it has also been applied to wider types of project management, including construction.

Some of the early thought leaders and authors in kanban are:

Kanban is based on six practices:

Kanban is a collaborative form of continuous improvement. It is not meant to overturn ongoing project management methods and can be implemented in conjunction with existing strategies. It can also be introduced incrementally, so it does not cause disruption.

In construction applications, kanban can be used effectively with suppliers to manage resources. Kanban boards can also be used to visualise stages of work processes and identify potential problem areas.

NB The Chartered Institute of Procurement & Supply (CIPS) Glossary of procurement terms, defines Kanban as: ‘A production method where instructions are sent from one operation to the next on a card, including specific items and quantities. (Translated from the Japanese, it literally means ‘signboard’ or ‘billboard’). The aim is to reduce waste through over-production.’

The Practical Adoption of Agile Methodologies, APM Volunteer Research report, published by the Association for Project Management (APM) in May 2015, states: ‘Kanban is a method for managing knowledge work with an emphasis on just-in-time delivery while not overloading the team members. In this approach, the process, from definition of a task to its delivery to the customer, is displayed for participants to see and team members pull work from a queue’.

The Association for Project Management (APM) Agile Glossary defines kanban as: ‘a method for managing work, with an emphasis on just-in-time delivery.’ It defines a kanban board as: ‘a work and workflow visualisation tool which summarises the status, progress, and issues related to the work.’

Retrieved from "https://www.designingbuildings.co.uk/wiki/Kanban"
Create an article