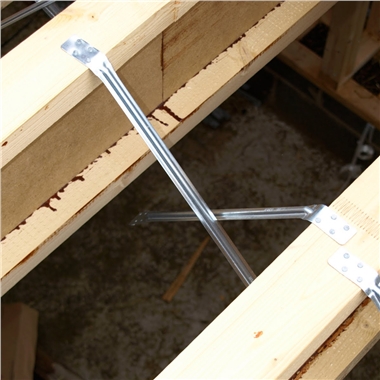 Herringbone struts are a form of cross bracing typically found between floor joists. Bracing between parallel rows of joists helps them to stay in place and prevents them from twisting.

Herringbone struts can be made of timber or pre-galvanised mild steel. They are sometimes used as an alternative to solid block bridging (or noggins/dwangs), particularly for long-span domestic floors. They are generally installed at the centre of a span when floor joists exceed 2.5 m. Spans exceeding 4.5 m may require two rows spaced at 1/3 and 2/3 span.

Timber herringbone strutting should be at least 38 x 38 mm timber and can only be used where the spacing between the joists is less than three times the depth of the joist.

They may be the preferred option if there is a lot of pipework or cabling to accommodate between joists, as they reduce the amount of drilling that would be required through solid noggings, which would weaken the floor.

A common problem in older dwellings is that floors feel ‘springy’. This can, in part, be because the herringbone struts have been removed in order to run services. Their re-introduction, or the reintroduction of regular noggings can help reduce the problem as the floor is encouraged to behave more as a 'slab' rather than a series of individual joists.

Alternatively, and perhaps more reliably, the floor can be strengthened, by 'sistering' steel, timber or ply reinforcing joists to the side of the existing joists, although, perversely, the installation of reinforcement can be made more difficult by the presence of herringbone struts or noggings.

Retrieved from "https://www.designingbuildings.co.uk/wiki/Herringbone_strut"
Create an article