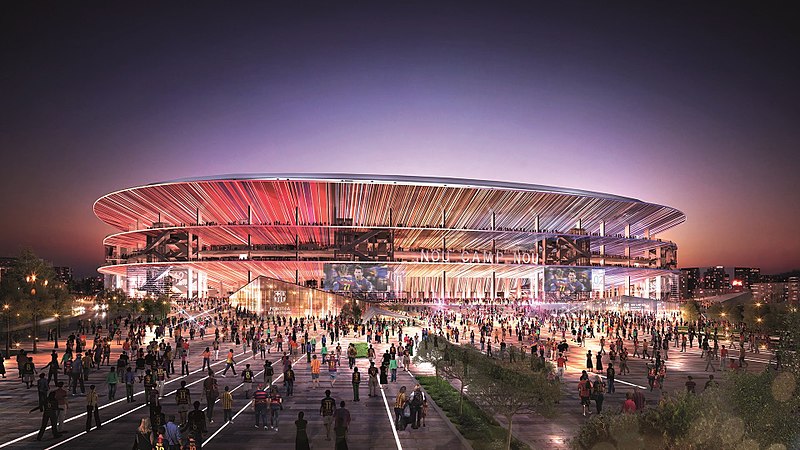 Rendering of Camp Nou, which was discussed during the evening.

On 17 June 2020, the annual Ulster University TALK AT and End of Year Show was held online.

Host David Comiskey announced the award winning graduating students from the university’s Architectural Technology and Management programme. Recognising the potential of these outstanding students, David said they were akin to “modern day master builders” based on the quality of their work.

After the first series of winners was announced, David introduced the speakers, who shared their thoughts on the subject of architectural technology, wellbeing and COVID-19.

The first presenter was Mel McGerr MCIAT, Director at MMA Architects. Mel spoke about the role of health and wellbeing in architecture. He discussed how workspaces will be reimagined due to changes in corporate culture and stressed the importance of bringing nature into the workplace.

Mel’s presentation was followed by an informal, but informative conversation between David and motivational speaker Enda McNulty who chatted about the importance of wellness and resilience, particularly during such a challenging time for young graduates. Enda, who is CEO at McNulty Performance, is also a successful author. He is perhaps best known as a Gaelic footballer, winning seven Ulster titles, a National League and an All-Ireland title.

Now a sports psychologist, Enda works with high profile sports organisations and professionals and has advised a number of young athletes and rugby players. In the current environment, he advised attendees to focus on the importance of daily rituals and gratitude. He acknowledged the significance of embracing technology and made the recommendation to prioritise “smart work, not hard work”. Based on comments during the question and answer session, Enda’s ideas and advice were well received by many of the students who participated in the virtual event.

The next speaker was Eddie Weir, President of the Chartered Institute of Architectural Technologists, who mentioned the unanticipated but welcome growth in membership the organisation has experienced during the pandemic. He also said architectural technologists were in a position to be significant contributors to the new way of working, particularly when included at the early stages of the project process.

Finally, Jordi Armada Soler shared a detailed update on the progress of the massive Espai Barça redevelopment. When completed, the project will include FC Barcelona’s Camp Nou stadium (expected to be the largest in the world) along with three other sports structures. The redevelopment will also include additional parking and extensive infrastructure projects that will be integrated into the surrounding Les Corts neighbourhood. The renderings he shared during the presentation (like the one included with this article) received high praise from the audience.

Jordi explained how work on the complex Camp Nou stadium could only move forward during the off season, which has had a major impact on its progress. In addition to delays caused by COVID-19, various external factors have resulted in complications, but plans for the project are still expected to move forward.

Work from graduating students in the Ulster University Architectural Technology and Management programme were displayed after the question and answer session concluded. Included in the showcase was a series of rapid research presentations covering a range of topics including generative design, biophilic design, tiny homes, cavity barriers and passive fire protection, modular construction for social housing and the £100K house.

Retrieved from "https://www.designingbuildings.co.uk/wiki/Architectural_technology,_wellbeing_and_COVID-19"
Create an article