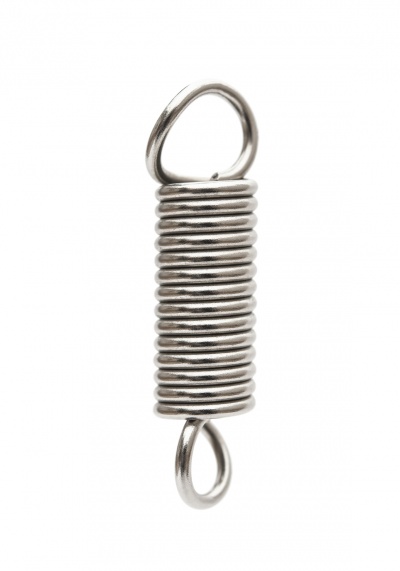 Although sounding similar, tension and torsion springs are completely different. Tension springs are manufactured to operate with tension; as tightly wound coils, they stretch to a specific length as torque is applied to them. When in an unloaded position, the spring loops are touching with either a hook or a loop that is attached at one of the ends. The springs stretch when this attachment is directed with force. The springing action is caused when the components are pulled apart and the springs attempt to hold themselves together. After the force is stopped, they return to their original position.

Torsion springs are coiled springs, which work due to a twisting or torsion rotational motion. This allows for an object to store mechanical energy as it is twisted, exerting force in the opposite direction depending on the angle that it is twisted. A helical looped design is the most common design for torsion springs, which consists of a coiled metal wire that is twisted tighter and tighter by sideways forces that are applied on either a left-hand or a right-hand helix.

Most springs follow Hooke’s Law of elasticity, which states that the extension of an elastic rod is linearly proportional to the force, or torque, used to stretch it. The law is held approximately when the deformation is considered to be small in comparison to the overall length of the rod. The equation used to represent the force of a fully compressed spring is the following:

d – is the spring wire diameter

L – is the free length of the spring

n – is the number of active windings

D – is the spring’s outer diameter

Torsion springs work by either twisting or torsion, in which they store mechanical energy when twisted. When they are twisted, the springs exert torque in the opposite direction in a proportional amount to the angle that they are twisted.

These springs obey Hooke’s Law, as long as not twisted beyond the elastic limit:

In joules, U, the energy stored in a torsion spring is represented by the following equation:

Retrieved from "https://www.designingbuildings.co.uk/wiki/Tension_springs_v_torsion_springs"
Create an article