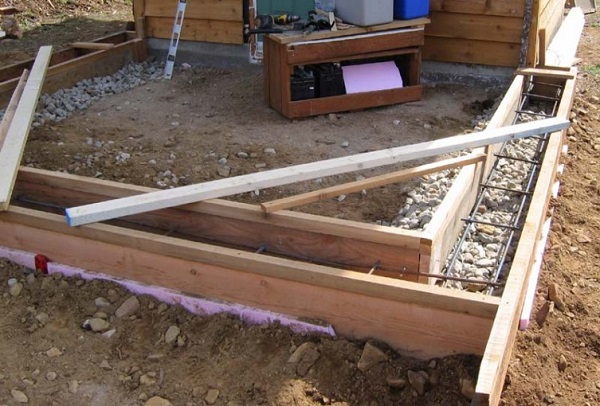 This is a variation of the trench fill foundation, and is a traditional construction method which uses loose stone or rubble to minimise the concrete requirement and improve drainage. It follows the same approach as a French drain, with a trench that is filled with crushed stone letting any water drain down and away from the foundation.

This approach has been used in various guises for thousands of years but it was popularised in the 20th century by the architect Frank Lloyd Wright, and has been promoted as being more environmentally-friendly than other foundation types.

The bottom of the trench should slope with an even descent of at least 3 cm for every 1 m of trench, which diverts the water towards one point, from which it can be diverted away through an outlet or to a dry well.

The trench should be lined with a geotextile material to prevent the surrounding soil from clogging up the trench and outlet. It is then filled with angular and washed stones of average size 2.5-5 cm, with them being compacted at every 30 cm layer using either a pneumatic or hand-powered tamper.

The washing of the crushed stone is important since it removes sand, silt and other small particles that could build up in the trench over time.

When it reaches around 20-30 cm below grade, the larger blocks of stone can begin to be built up as a continuous wall.

This type of trench is unsuitable for particularly expansive or poor load-bearing soils. An alternative, less eco-friendly solution, is to combine the rubble fill with a concrete grade beam.

Retrieved from "https://www.designingbuildings.co.uk/wiki/Rubble_trench_foundation"
Create an article