Pareto analysis is a statistical decision-making technique that identifies a limited number of input factors as having a greater impact on outcomes, whether they are positive or negative. It is based on the Pareto Principle, popularly known as the ‘80/20 rule’, that stipulates that 80% of the outputs result from 20% of the inputs.

The principle was developed by Vilfredo Pareto, a 19th century Italian economist and sociologist who was researching wealth distribution. He subsequently discovered the 80/20 rule applied to areas outside of economics, for example, 80% of the peas in his garden were produced by only 20% of the peapods planted.

Pareto analysis can also be used as a project management tool. For example, the majority of problems (80%) are produced by relatively few causes (20%); and 80% of the project’s benefits are delivered through 20% of the work.

Put simply, Pareto analysis shows that a disproportionate improvement can be made by ranking the various causes of a problem and allocating resources to tackling those that have the largest impact.

In construction, there may be a problem with the project programme that is the result of a large number of causes. Through observation and the collection of data, it might be determined that there are 8 causes. Pareto analysis may show that 80% of the problems result from the top 2 or 3 causes. The project management team can then plan an appropriate response, targeting resources at those 2 or 3 causes, rather than all 8. 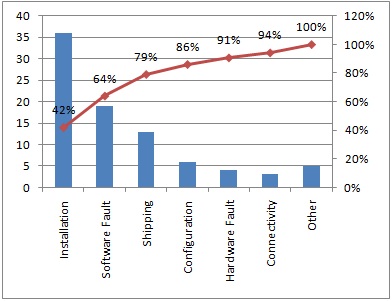 A Pareto diagram (or chart) can be used to present the analysis, helping the project team to focus on the inputs with the greatest impact.

Retrieved from "https://www.designingbuildings.co.uk/wiki/Pareto_analysis_in_construction"
Create an article