On 11 August 2015, the government published a blueprint for £13 billion of government investment in transport to help create the ‘Northern Powerhouse’. (Ref. Gov.uk.) 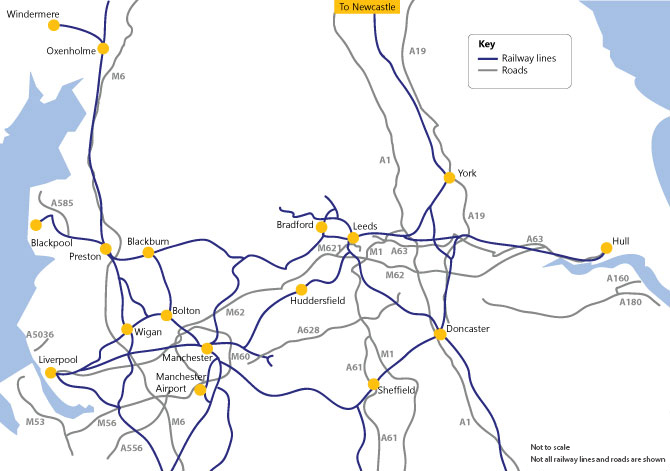 The government describes the Northern Powerhouse initiative as ‘…a one-nation drive to close the economic gap between north and south by helping the region unleash its full power and create a balanced, healthier economy.’

The government believes that improving transport links in the north will bring its cities and regions closer together making it easier for people and businesses to access markets and deploy their skills.

The transport improvements set out in the blueprint include:

Transport Secretary Patrick McLoughlin said that the government was determined to, "…close the economic gap between north and south. Investing in transport – something that successive governments have failed to do sufficiently – is vital to making that happen."

Commercial Secretary at the Treasury Lord O’Neill said, “Investing in first class transport infrastructure is a key part of our commitment to create a Northern Powerhouse. Our investment is helping to better connect the region, building a strong Northern economy, and it is great to see the huge progress already underway.”

Andy Clarke CEO of Asda and member of a new Business Advisory Group created by the Prime Minister said, “Businesses need the right infrastructure and the confidence that government is supporting, not thwarting, their ambitions. Linking our great cities will help to fuel this engine for growth while creating more jobs and opportunities, and the transport schemes being announced today are welcome progress.”

The government also announced that businesswoman Michelle Mone OBE would carry out an independent review of ways to encourage business start-ups and entrepreneurship in disadvantaged communities, including those in the north. This will focus on identifying obstacles faced by people in the most disadvantaged areas and will make recommendations to Work and Pensions Secretary Iain Duncan Smith and Business Secretary Sajid Javid in 2016.

In November 2017, new legal powers were announced, giving the North an unprecedented say on how money is spent on transport.

From April 2018, Transport for the North (TfN) will get new powers to:

Retrieved from "https://www.designingbuildings.co.uk/wiki/Northern_Powerhouse_transport_blueprint"
Create an article