No Little Plans: how government built America's wealth and infrastructure 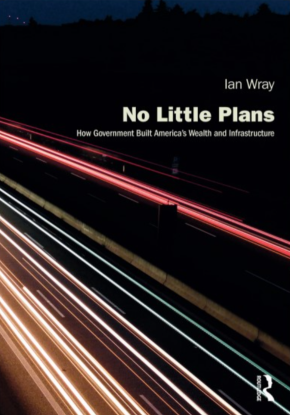 The idea that the state is an obstacle to economic development and progress has achieved a status close to received wisdom on the political right on both sides of the Atlantic. But in this book Ian Wray, a planner and visiting professor at Liverpool University, looks at environmental, infrastructure and information technology initiatives in the USA from the 19th century to the present. He shows that, from national parks to the development of the internet, the role of government in the USA has been essential. In Wray’s view, and on the evidence he presents, the basic principle of neoliberal economics and politics, that the state should simply get out of the way, is demonstrably wrong.

State intervention had liberal as well as conservative critics. Jane Jacobs attacked city planning in ‘The Death and Life of Great American Cities’ in 1961. Rachel Carson in ‘Silent Spring’ (1962) mounted a parallel attack on the effects of industrial and scientific progress on the natural environment. With the development of the civil rights movement and the counter-culture, the state was subject to attacks from both the right and the left.

In the central part of the book Wray sets out a series of case studies of ‘American Advance’. The trans-continental railroads were dependent on government funding and land grants before they were justified by economic demand. The development of national parks had its intellectual origins in the philosophy of Henry David Thoreau and Ralph Waldo Emerson and the campaigner John Muir, but was given political force by President Theodore Roosevelt, who trekked into the snows of Yosemite with Muir in 1903. Theodore Roosevelt also set up the government Reclamation Service, which created and implemented water supply and electricity generation projects such as the Hoover and Grand Coulee dams, the precursors of other massive, state-sponsored infrastructure projects.

One of the greatest drivers of government-sponsored change was the second world war. It drove advances in science and industrial production, all hugely funded by government. After the war President Eisenhower’s Interstate Highways Act of 1956 changed America profoundly, opening up new settlements and suburbs, and modernising a previously underdeveloped road system. Wray shows that the early vision of the internet also had its first stirrings in the years after the second world war and the promotion of state-sponsored science by the visionary innovator Vannevar Bush.

The other great driver of change was the Apollo moon landing programme, for which only the state could have met the cost and shouldered the huge risks involved. Crucial to the success of the programme was the development of the miniature Apollo guidance computer. Although primitive by modern standards, the advance in computer science that it triggered was a world-changing spinoff from the Apollo programme.

In the field of city planning Wray charts the move from privately sponsored city plans in Chicago in the early years of the 20th century to the later state-sponsored plans of New York. There the towering figure was Robert Moses. Beginning with the development of state parks he moved on to planning roads to ease congestion in New York City. Driven and sometimes brutally confrontational, Moses pushed through huge building programmes, including the Triborough and Verrazano Narrows bridges.

‘No Little Plans’ is an effective critique of an economic and political orthodoxy. What can we as building conservation professionals take away from it? Perhaps that our mixture of public funding, regulation and support with private investment and expertise is more powerful than we thought.

This article originally appeared as ‘The essential state’ in IHBC's Context 163 (Page 56), published by The Institute of Historic Building Conservation in March 2020. It was written by Michael Taylor, editorial coordinator for Context.

Retrieved from "https://www.designingbuildings.co.uk/wiki/No_Little_Plans:_how_government_built_America%27s_wealth_and_infrastructure"
Create an article