UK emissions of the basket of six greenhouse gases covered by the Kyoto Protocol were 22.0 per cent lower in 2008 than they had been in 1990, down from 779.9 to 608.4 million tonnes carbon dioxide equivalent. The Climate Change Act 2008 established a legally binding target to reduce the UK’s greenhouse gas emissions by at least 80% below 1990 levels by 2050.

To drive progress and set the UK on a pathway towards this target, the Act introduced a system of carbon budgets which provide legally binding limits on the emissions that can be produced in successive five-year periods, beginning in 2008. The first three carbon budgets were set in law in May 2009.

The Low Carbon Transition Plan: National strategy for climate and energy, was published by the government in July 2009. It set out the strategy for meeting these three carbon budgets. It showed how reductions in the power sector and heavy industry; transport; homes and communities; workplaces and jobs; and farming, land and waste sectors could enable carbon budgets to 2022 to be met. 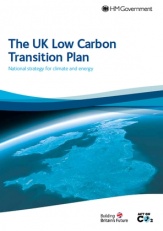 The Low Carbon Transition Plan was an overarching document and a number of more detailed documents were published alongside it:

The Carbon Plan: Delivering our low carbon future, published in December 2011, updated and superseded the Low Carbon Transition Plan and presented the Government’s strategy for meeting all four carbon budgets, with a particular focus on the fourth carbon budget.

It found that annual emissions in the UK had actually increased since 2009, primarily due to an increase in gas consumption from heating. The report states “There has been a growing divergence occurring over just a few years (2009 through 2013). Given the steepness of the trajectory required to meet the ambition for built environment carbon reductions (and statutory targets for the UK as a whole), a significant transformation from the ongoing ‘status quo’ trajectory is needed.”

It also found a slight increase in ‘capital carbon’, suggesting “The data provides no evidence of a trend driven by efficiencies or process improvements in design, manufacturing or the supply chain."

Retrieved from "https://www.designingbuildings.co.uk/wiki/Low_Carbon_Transition_Plan"
Create an article