[edit] What is Japanese knotweed?

Japanese knotweed, the country’s most invasive weed, was imported into the UK around 1820. It grows very quickly and has now spread to every county of the UK. It is causing significant problems for owners and occupiers of affected land, and for developers and contractors on development land.

The plant has an extensive root system that spreads horizontally to great depth. If the root system is not killed or removed in its entirety, it will continue to grow, infesting more land and exacerbating the problems it causes.

[edit] How is Japanese knotweed identified?

Early identification of the plant is essential to prevent disturbance of ground within infested areas. Ground disturbance results in rapid spread of knotweed to other areas on or off site, which has significant legal ramifications.

Japanese knotweed is usually fairly distinctive as it is a tall (2-3m high) plant. However, being perennial it appearance changes with the seasons, starting with new shoots in spring, growing to its full height by July. It flowers in August or September before dying back in November leaving brittle leafless canes in winter, making it more difficult to identify.

The appearance of the plant can be substantially altered by application of certain herbicides, making the identification of Japanese knotweed more difficult to the untrained eye. Where these have not been completely effective the knotweed re-growth returns with stunted plants, not exceeding waist height, with small leaves and spindly stems. 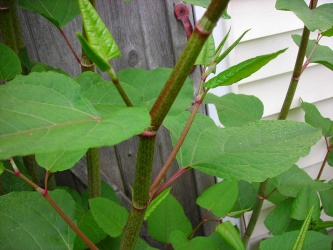 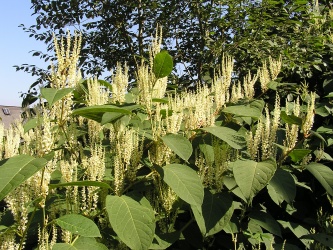 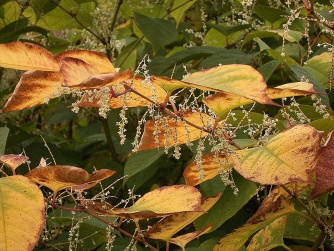 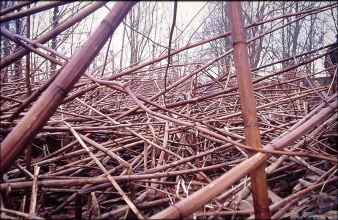 If a developer has a site infested with knotweed, then complete eradication of the knotweed should be the goal. This is not easy, but tried and tested methods do exist, and when undertaken correctly can provide the desired result. However, developers should be wary, there are many pitfalls. The old adage ‘you get what you pay for’ applies to the knotweed eradication market.

If a developer causes knotweed to be spread off site, they could find themselves at the wrong end of criminal proceedings under either the Wildlife and Countryside Act 1981, or the Environmental Protection Act 1990 ‘duty of care’. Offences under these Acts, whether intentional or not, can result in significant fines and, in extreme cases, custodial sentences.

A number of eradication methods exist which suit different circumstances and which involve differing costs and levels of effectiveness.

If the ground is not going to be disturbed (which is rarely the case on a development site) and some limited regrowth is tolerable, then herbicide treatment will be the most cost effective method.

Herbicide treatment is typically applied either as a foliar spray or by stem injection. There is concern within the Japanese knotweed eradication industry regarding the effectiveness of stem injection as an eradication technique. Discussion has centred on whether stem injection simply kills the above ground part of the plant, leaving the rhizome system alive but in a state of temporary dormancy.

However, application by foliar spray is tried and tested, and if done correctly can kill knotweed.

If the ground within an area of knotweed-infested land is likely to be disturbed, then herbicide treatment alone is unlikely to be sufficient and a physical removal method will be preferable.

[edit] Dormancy and the risk of accidental contamination

Japanese knotweed has a particular characteristic known in the industry as ‘dormancy’ - the plant can be shocked into a state of temporary dormancy by herbicide application. It may look as if the problem has been resolved at the surface, when in fact viable root rhizome remains in the ground, ready to resurface when the conditions are favourable to the plant.

As Japanese knotweed roots can easily be at least 2 m deep, and as the rhizomes spread laterally into areas which may appear unaffected, the risk is clear. In these circumstances a contractor may then accidentally disturb hidden rhizomes and fragment and spread them to other areas of the site, and possibly off site. This would significantly increase the scale of the problem, the cost of remediation and would be a breach environmental legislation.

Historically, ‘dig and dump’ was seen as the solution, where all infested soil was excavated, loaded into large lorries and taken to landfill. This is extremely costly, both to the client’s budget and the environment. Better and less expensive solutions are now used.

A new method has been developed whereby the excavated soils are processed on site using purpose-designed and patented technology to separate and remove the knotweed rhizome from the soil. The offending rhizome is removed from site, and the processed soil re-used on site, to give zero waste to landfill.

On larger development sites, there may be adequate space to excavate the infested soils from construction-critical areas, and stockpile the material on site for subsequent herbicide treatment over one or more growing seasons. This method can be cost effective but does require considerable space for the stockpile, so is often not feasible.

On-site burial is a method referred to in the Environment Agency Knotweed Code of Practice, whereby the infested soils are buried at depth within a membrane-lined cell. This method does contain the knotweed but should not be considered as an eradication technique, due to the fact that knotweed rhizome remains untreated on site; a rhizome which can lie dormant for up to twenty years.

The best solution will be dependent upon site conditions, programme, cost and the developer's appetite for risk.

It's important to ensure the knotweed company selected has the skills, experience and resources to completely eradicate the knotweed, as well as the financial stability to be able to honour any guarantees they may offer. It is advisable to check their credentials, their financial security and their trading record.

Retrieved from "https://www.designingbuildings.co.uk/wiki/Japanese_knotweed_identification_and_eradication"
Create an article