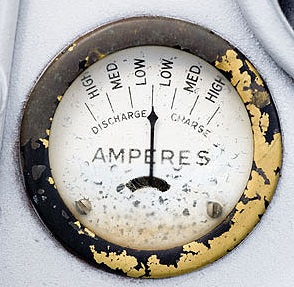 An ampere (A), also known as ‘amp’, is a unit of electrical current equal to the flow of one coulomb per second. It is named after Andre-Marie Ampere who is widely regarded as the leading pioneer of electrodynamics.

The International System of Units (SI) defines the ampere as the unit that is used to measure electric current; current being a count of the number of electrons flowing through a circuit.

One amp is the amount of current produced by a one volt acting through a resistance of one ohm.

Measuring amperes is important when working with electrical systems as a means of ensuring that the wires are not handling a higher current than they are rated for, and therefore risking faults or failure.

Amperes can be measured using a digital multimeter, but since models differ according to the amount of current they can measure, care should be taken to make sure a device with the correct rating is used.

Ampere’s force law states that there is an attractive or repulsive force between two parallel wires that carry an electric current.

Retrieved from "https://www.designingbuildings.co.uk/wiki/Ampere"
Create an article