What's so great about the Eiffel Tower? - review 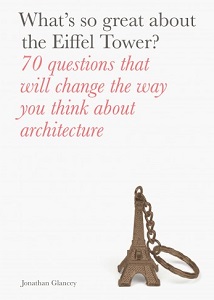 Jonathan Glancey - 'What’s so great about the Eiffel Tower?: 70 questions that will change the way you think about architecture'

In this compact pocket-sized book, Jonathan Glancey tackles several of architecture’s most sacred cows, inviting readers to reassess their assumptions about some of history’s great masterpieces and their architects.

Taking its title from the oft-repeated anecdote about the writer Guy de Maupassant and the ‘Committee of Three Hundred’ who attacked the ‘useless and monstrous Eiffel Tower’, the book proves that history benefits from fresh interpretation and scrutiny.

Some of the contentious subjects that Glancey explores include; whether the Sagrada Familia is a work of genius or kitsch, whether St. Paul’s Cathedral is a Baroque masterpiece or Renaissance sham, and whether the likes of Le Corbusier, Zaha Hadid and Adolf Loos are really all they’re cracked up to be.

While eschewing detail in favour of brevity, Glancey nevertheless provides enough to engage and enlighten even the most fervent architecture geek. For non-experts, there’s plenty of interesting content that will reward frequent flicking through, and for pub contrarians, there’s more than enough provocation to furnish an arsenal of ‘alternative opinions’.

Glancey, who has previously written books such as ‘New British Architecture’ and ‘Lost Buildings’, writes in an irreverent and light style that successfully balances context and terminology, making the book both very readable and suitable for dipping in and out.

Retrieved from "https://www.designingbuildings.co.uk/wiki/What%27s_so_great_about_the_Eiffel_Tower%3F_-_review"
Create an article