The origins of perspective 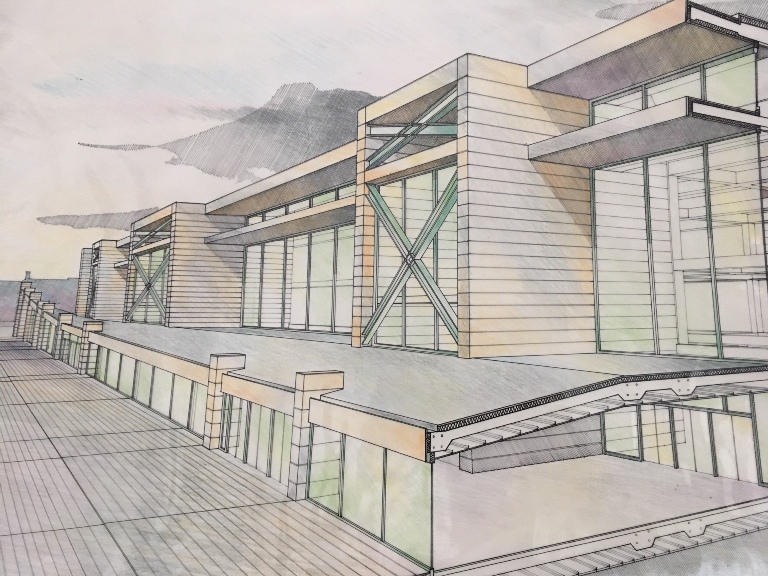 Perspective is a technique for realistically depicting three-dimensional volumes and spatial relationships in a two-dimensional representation. The information needed to construct a perspective image is the eye level of a notional observer and the vanishing point (or points).

The eye level or the 'horizon line' is an imaginary line at the height of a viewer’s eye '...horizontals define eye level in similar circumstances, where no such indicators are available; a pencil held outstretched level with the eye will serve as a guide from which an eye level line may be projected' (ref. Creative perspective for Artists and Designer, pg.26).

Vanishing points can be identified by following the convergence of lines. They are usually used in one point, two-point or three-point perspective drawings.

The Greeks were the first to use perspective on painted vases, but according to Pirene, only in '...a fragmentary and possibly purely empirical way'. Around 300 B.C, Euclid studied natural perspective in his book Optica, and was the first to define the terms visual ray and cone (Calter, 1998).

Roman painters seem to have understood the basic principles of perspective. Vitruvius defined perspective as '...the method of sketching a front with the sides withdrawing into the background, the lines all meeting in the centre of a circle' (Calter, 1998). According to Pirene Roman paintings such as those in Pompeii and Herculaneum '...strangely overshadow many of the paintings of the Italian Renaissance'.

Ptolemy, in his book Optica (140 A.D), studied geometrical optics and defined the centric ray, a key element in perspective. In his book Geographia, he applied linear perspective but only to maps (Calter, 1998).

In the centuries that followed these classical pioneers, religion was the main focus of painters whose aim was the representation of the divinity. There was no need to depict depth as the divine figure was placed in a divine context (often represented simply by gold and silver) not within a physical landscape. The angle of view was not important as the distinction between man and divinity was signalled by size (Battisti 2002, 106).

During the Renaissance, artists focused on the representation of man and shifted away from depicting the divine. Humanism was the main influence in both art and science as intellectuals returned to Greek philosophy.

Classical knowledge reached Italy by the beginning of the Quattrocento and this was made more accessible by the discovery of the moving press by Gutenberg. However, examples of the shift to perspective paintings preceded Quattrocento, for example, in the work of Giotto in the fourteenth century.

In the Quattrocento, Filippo Brunelleschi (1377-1446), a great Florentine architect, visited Rome and studied the magnificent monuments of the ancient city. His desire to accurately draw what he saw, led to him to explore the forgotten principles of linear perspective. Paolo dal Pozzo Toscanelli (1397-1482), an astronomer and mathematician, had studied Ptolemy’s work and wrote a treatise on optics in 1424.

When Brunelleschi returned to Florence, perhaps with coaching by his friend Toscanelli, he made the first linear perspective pictures since antiquity. Although Brunelleschi was influenced by the work of artists like Giotto, it was, according to Millon (1994), '..in a way that was no longer intuitive and empirical' but was rather '...scientific, rational and systematic'.

Brunelleschi’s experiments influenced the work of painters in the Quattrocento, and Brunelleschi assisted his friend, the painter Masaccio (1401-1428) in applying linear perspective in his painting The Trinity.

In 1435 Leon Battista Alberti, (1404-1472), documented and expanded Brunelleschi’s theories on linear perspective in his book Della Pittura. Following this, and after searching the writings of Vitruvius, Alberti wrote his own treatise on Architecture. His book De re aedificatoria is considered the first architectural treatise of the Renaissance.

In the years that followed, painters used the principles described in Alberti’s Della Pittura in their work. Paolo Uccello applied Alberti’s theories in his painting The Flood (1447-1448). Uccello’s work is, according to Collins (2008), '...a visual interpretation of the theories expounded by Alberti in his treatise Della Pittura'.

During the Quattrocento, many intellectuals had tried to codify the principles of linear perspective, but it was Leonardo Da Vinci (1452-1519) that expanded these theories in a scientific context. Leonardo was aware of the inconsistencies in the theories of his predecessors and evidence suggests that he even prepared a book on perspective, separate from his treatise on painting.

In one of his most famous pieces of work, 'The Last Supper' (1497), Leonardo successfully uses his study on perspective to place the main focus on Christ. The vanishing point is placed on Christ’s right eye and the perspective is emphasised by his hands, which are set almost parallel to the converging lines. Leonardo’s treatise proved to be of great importance, and even today, according to Toman (2007, 106), '...architects and painters still consider the method of perspective construction as refined by Leonardo to be a valid one'.

Alberti’s and Leonardo’s treatises inevitably influenced the way perspective was used in an architectural context. Donato Bramante, a close associate of Leonardo, was greatly influenced by their work. In his design of the S. Maria presso S. Satiro (1482-92), Bramante was able to overcome obstacles, which prevented him from adding a conventional choir, by '...using the illusionistic potential of linear perspective” (Fazio et al, 2009). Later, Michelangelo would apply perspective principles in his designs for the Medici Chapel and the Laurentian Library in Florence.

The legacy of the treatises of the Quattrocento is evident even now. CAD, BIM and CGI software use perspective views to communicate design ideas, and these technologies clearly owe a great deal to the close study and application of perspective principles in the Renaissance.

Retrieved from "https://www.designingbuildings.co.uk/wiki/The_origins_of_perspective"
Create an article