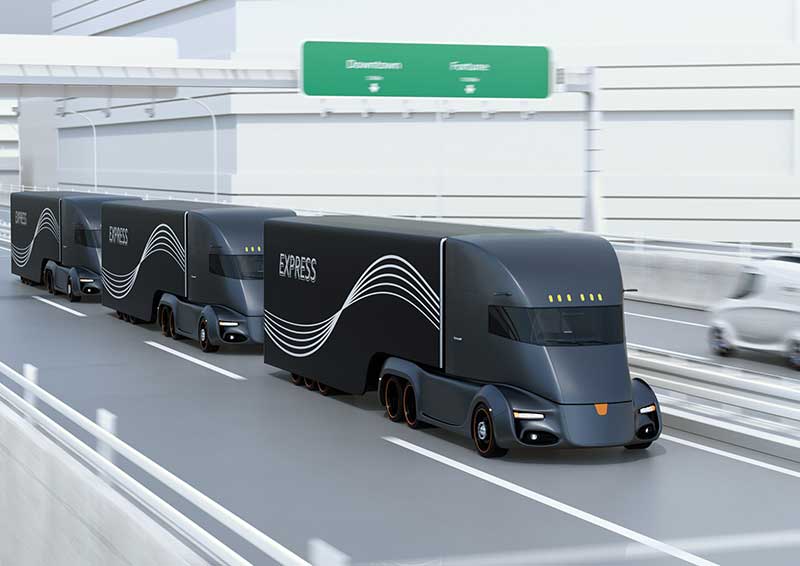 Up to three trucks travelling close together, known as ‘platooning’, is being looked at by the National Infrastructure Commission (NIC) as part of a study into freight in the UK.

Referred to variously as ‘HGV’, ‘truck’ and ‘lorry’ platoons – these are convoys of up to three heavy goods vehicles, travelling close together with acceleration and braking controlled by the lead vehicle and using smart technologies to mutually communicate. Three vehicle platoons are in the region of 50 m long.

Highways England and the Department for Transport are currently conducting a study which will lead to on-road platooning trials later in 2018. This is an £8 million information generating exercise to underpin future policy decisions.

Roads are the primary method of transporting freight within the UK. In 2015, just over three quarters (76%) of all goods moved by road with the remainder by water (15%) and rail (9%).

The UK strategic road network faces a range of challenges from loading and congestion, its relatively unplanned nature and resulting high transport emissions. Reducing the volume, and increasing the efficiency of road freight is essential.

A range of potential benefits from HGV platooning have been suggested by the European Automobile Manufacturers Association:

[edit] Challenges of going down the platooning road

The UK strategic road network has grown gradually and organically over time. It has not been as heavily planned as other countries and on key stretches is heavily loaded.

It is interspersed with junctions and slip roads, often quite close together. This automatically creates challenges for HGV platoon trails, identifying how to manage other vehicles’ access to the road. The perception of 50 m HGV platoons as a long road block and the time needed to overtake (based on margin speeds) are still significant issues.

This could be addressed by automated coupling/uncoupling of HGVs in the platoon to accommodate access from slip roads. Separation from other road traffic has also been suggested but it is as yet unclear what this might look like and what the economic implications might be. Its potential may be most fully realised in a Level 5 (full autonomy) vehicle autonomy environment.

A broad range of unknowns exist, including how HGV platoons may impact impact upon existing infrastructure and design requirements for future infrastructure.

It is possible that, should HGV platooning be deployed, assumptions will have to be changed about the vibration impacts on bridges or road surface deterioration rates.

This article was originally published here on 6 March 2018 by ICE. It was written by Kelly Forbes, ICE Policy Manager.

Retrieved from "https://www.designingbuildings.co.uk/wiki/Platooning"
Create an article