BRE is an independent, research-based consultancy, testing and training organisation, operating in the built environment and associated industries. 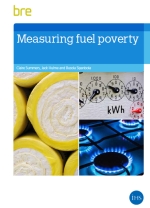 BRE has been measuring fuel poverty on behalf of the UK government since the 1990s. The new publication describes the origins and development of the fuel poverty concept, its measurement in the UK, and how it is used to help target those households most at risk of being unable to heat their homes.

The concept considers that households in fuel poverty may be placing themselves at risk by not heating their homes to sufficiently to prevent ill health. To assist these households, it is first necessary to identify them.

The two main measures of fuel poverty are the 10% definition and the Hills Low Income High costs (LIHC) definition.

The publication explains the development and definitions of fuel poverty, and summarises fuel poverty trends over time. It considers who the fuel poor are, and looks at the reasons for changing levels of fuel poverty. It is intended to provide background to the concept for housing associations and housing providers, energy suppliers, policy makers, energy consultants and academics.

Retrieved from "https://www.designingbuildings.co.uk/wiki/Measuring_fuel_poverty"
Create an article