Changing energy behaviour in the workplace (FB 73) was written by Mindy Hadi and published by BRE on 16 March 2015. 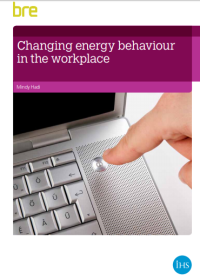 Companies are becoming more aware of the public relations value of the green agenda. Information on their sustainability performance is being reported on, including in annual corporate responsibility reports.

Energy use is influenced by a variety of factors: physical factors such as the building itself, its services and control systems, and also social factors that govern energy use behaviours, such as lifestyle, individual differences and group composition.

This 20-page guide discusses the impact of energy use in the workplace on both the end-user and the company. It considers the role of feedback as a change mechanism and the use of interfaces such as eco-visualisation to motivate and maintain change, using examples from BRE research.

It is aimed at small and large organisations and corporate occupants who are interested in engaging their staff in saving energy in the workplace.

Retrieved from "https://www.designingbuildings.co.uk/wiki/Changing_energy_behaviour_in_the_workplace_(FB_73)"
Create an article