U-value conventions in practice: Worked examples using BR 443 was written by Sean Doran and published by BRE on 13 Jan 2012. The 36 page publication helps designers develop a better understanding of how to calculate U-values and kappa-values for use in calculation tools. See also Conventions for U-value calculations (2006 edition) BR 443. 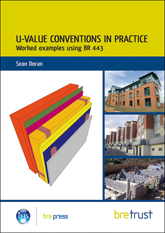 U-values, (sometimes referred to as thermal transmittances) measured in W/m²K represent how effective elements of a buildings fabric are as insulators. That is, how effective they are at preventing heat from transmitting between the inside and outside of a building. The lower the U-value of an element of a building's fabric, the more slowly heat is able to transmit through it, and so the better it performs as an insulator.

Kappa values (sometimes referred to as thermal mass values) measured in kJ/m2K represent the heat capacity per square metre of a material. This is used to quantify the thermal mass of building elements such as walls and floors. The higher the kappa-value, the greater the thermal mass, that is the more heat the element is able to store.

These values are integral to the use of energy calculation tools such as the Standard Assessment Procedure (SAP) and the Simplified Building Energy Model (SBEM), which support Part L of the Building Regulations, Conservation of Fuel and Power. As a result, it is important that they are calculated reliably.