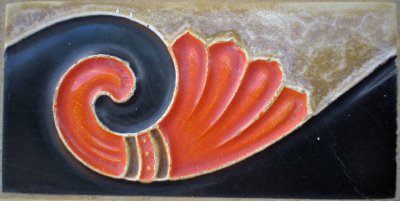 The running dog pattern - sometimes simply referred to as running dog - was also known as Vitruvian scroll, Vitruvian wave and wave scroll. It is a repeating wave-like pattern that also looks like a series of scrolls if viewed from the end and joined together.

Running dog was often used in friezes, mouldings and other types of architectural borders. It was carved or painted onto the surface and appeared as the central element of a classical band or entablature.

The style can be found in the Roman Composite Classical order that appeared in the fifth century BC. It also appeared in Greek and Roman revival architecture.

The origin of the name running dog is unknown. However, the term is also frequently used for the same type of pattern (which can look like a series of dogs running) on certain ancient Persian carpets.

Retrieved from "https://www.designingbuildings.co.uk/wiki/Running_dog_pattern"
Create an article