In August 2015, a market study from BSRIA showed that large hyper data centres are changing the market for precision cooling and that over the next five to 10 years the use of traditional computer room air-conditioning (CRAC) units is expected to drop dramatically as data centres opt for a combination of free cooling, liquid cooling and chilled-water cooling.

Hyper scale data centres such as those of Apple, Google, Facebook, Amazon, AWS and Yahoo! are very open to deploying “new” technologies, for example: modular, outdoor AHUs (air handling units) / evaporative cooling. This has driven a lot of change and enabled traditional air conditioning manufacturers like McQuay, Trane, Carrier, JCI, Daikin and others to participate in the data centre cooling market. Data centres in general are evolving rapidly. The standard design that was common in the last two decades is giving way to more flexible configurations that more closely match the sophisticated needs of more discerning, better informed customers.

Lone Hansen, WMI Manager – I.T. Cable Group, said: “Most of the large hyper-scale (American) data centres have a centralised team that will develop the specification with regards to IT equipment and networks, cooling and power. The specification will typically be rolled out globally and include several (often three to four) approved suppliers in each product category. A global footprint is an important part of the selection criteria. Most value multiple source relationships as opposed to single source relationships. Some of the products are sourced direct from the suppliers to reduce the cost while others are bought through distribution.” 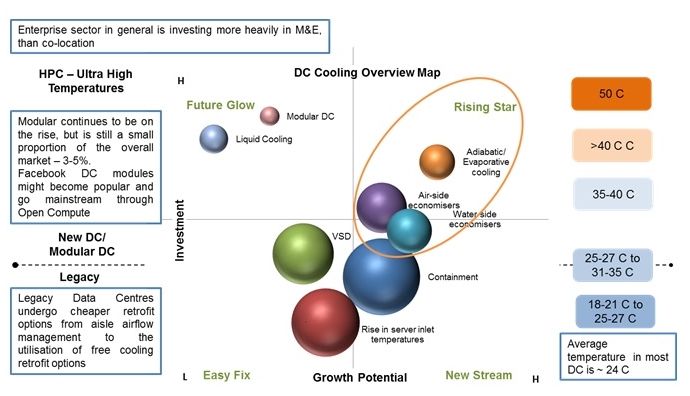 The figure above illustrates some of the new potential technologies and their positioning in terms of typical application and temperature operating range.

Data centre capacity is growing with the increasing number of IP connections, increasing traffic and need for storage. The precision cooling products installed in data centres are estimated at US$1.9 bn covering the 10 largest markets worldwide in 2014 and these markets are expected to show healthy growth up to 2017. 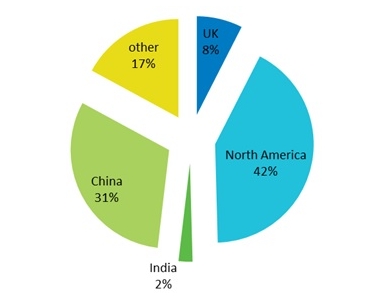 The US$1.9 bn does not include precision cooling products installed in non-IT sectors such as healthcare and laboratories, manufacturing, industrial, semi-conductors, education (close control applications in universities and school laboratories). Though smaller than the data centre market, this market is nevertheless substantial and its dimensions are also estimated in the study.

Retrieved from "https://www.designingbuildings.co.uk/wiki/Large_hyper_data_centres_demand_for_precision_cooling"
Create an article